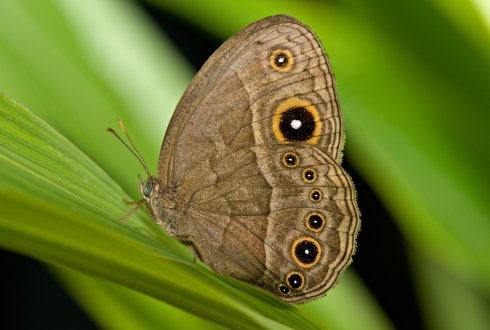 A species of butterfly that changes its appearance through the seasons lacks the genetic variation needed to quickly evolve a different response to more unpredictable environmental conditions, such as those expected under a changing climate, according to an international study including researchers from Wageningen University & Research.

The study, published 8 March 2018 in Nature Communications, uses gene expression and genomic analysis of an African savannah butterfly, Bicyclus anynana, to suggest that species that have different traits depending on the time of year may be especially vulnerable if the climate changes and their seasonal cues are no longer reliable.

“A general assumption in evolutionary biology is that species where individuals have the ability to adjust how they look and spend their energy in response to short-term changes in their environment, are also those most likely to adapt to climate change. Such environmentally induced changes in the appearance and functioning of individuals, known as phenotypic plasticity, are a common adaptation of insects in seasonally variable environments,” said the study’s lead author, Dr Vicencio Oostra (University College London UCL Genetics, Evolution & Environment; Wageningen University & Research, Laboratory of Genetics).

Gene expression in a butterfly as an example

The researchers studied the butterfly Bicyclus anynana from Malawi which is a textbook example of seasonal plasticity. If an individual is born in the warm wet season, it will live a short life of fast growth and maximal reproduction; if born in the cool dry season, its life history is one of inactivity, postponed reproduction, and long lifespan.

The authors analysed the RNA of 72 butterflies, in a split-brood, full factorial analysis investigating heritable and environmental effects, and found pervasive differences in how their genes are expressed between the dry and wet seasons. Within the abdomen and the thorax, close to half of their genes showed significant differences in how they are expressed between the two seasons. In addition, butterflies exhibited significant differences between families in the expression of many genes.

In contrast, they found that within the population, there was very little genetic variation for the seasonal plasticity itself, as only 1% of genes were dependent on the interaction between genetic background (family) and season. While there was lots of heritable variation in gene expression, this almost entirely disappears when the researchers looked at the genes involved in how individuals reacted to seasonal change – in terms of seasonal adaptation, every butterfly does the same thing.

“These butterflies have adapted to respond to very specific environmental cues on the savannah, mainly temperature during development, that highly accurately predict each season. Any deviation in how they change their phenotype to tune it to the prevailing season is maladaptive. Therefore, it appears that what we see in the genetic variation for the plasticity genes is a very strong legacy of natural selection against deviations from these seasonal responses,” said co-author Professor Bas Zwaan (Wageningen University & Research, Laboratory of Genetics).

“If their environment changes only very slowly, then this species could gradually adapt as potential beneficial mutations may come along, but in a rapidly changing climate, this is likely to be a problem. Seasonal changes are becoming less reliable, so being stuck in a specific seasonal response could put this species at risk of extinction,” said co-author Dr Christopher Wheat (Stockholm University).

While the researchers only looked at one particular species, they are planning to compare this butterfly to other species that live in less predictable environments to see if others might have more genetic variation that could help them adapt to climate change.

“To gauge how climate change will affect biodiversity, it is crucial to identify which species are most at risk and which can adapt. There are many species with seasonal plasticity, so we suspect there could be numerous species like this that are more vulnerable to climate change than previously believed,” added co-author Dr Marjo Saastamoinen (University of Helsinki).

Thus, on the one hand the study indicates that there is genetic variation for phenotypic plasticity that can be exploited in nature for adaptation, and potentially also in an agricultural setting. On the other hand, the result of such adaptation is a depletion of variation and an increased vulnerability to rapid environmental change.

The study was conducted by researchers based in the UK, Sweden, Finland, and the Netherlands, and was funded by the European Union, the Academy of Finland, the Knut and Alice Wallenberg Foundation and the Swedish Research Council.