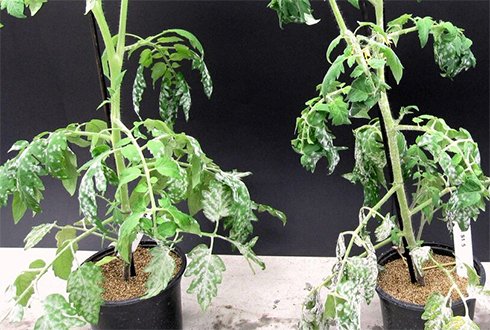 Some plants with resistance against a specific disease are also able to defend themselves effectively when they are stressed due to, for example, drought or saline soil. At the same time, the resistance of other plants no longer functions in these very same conditions. Although this had been assumed for some time, Wageningen scientist Christos Kissoudis is the first person to show why. As a result, plant breeders will be able to know whether their new varieties will remain resistant to disease when grown in sub-optimal conditions. Kissoudis is obtaining his doctorate based on this research at Wageningen University on 26 February.

Plant breeders have developed varieties with resistance to a wide range of pathogenic fungi and bacteria for a significant number of crops. Modern tomato plants, for example, are continuously equipped with resistance against many diseases. This allows tomato farmers to achieve a high yield without having to focus on disease control.

Generally speaking, crops are bred in such a way that the plants have proper resistance when grown in optimal conditions – with sufficient water and nutrients and in an environment that is not overly hot or saline. In the future, however, our crops are likely to face increasingly poor growing conditions. Climate change will result in more frequent and more intense droughts, and we will increasingly need to grow crops on saline soils. As plants become more stressed, this raises the question as to whether crops will still be able to defend themselves as effectively against disease if the genes responsible for resistance are not able to function properly in stressful conditions.

Christos Kissoudis studied this issue for tomatoes, researching several tomato lines  having different genes for resistance against mildew but otherwise very similar. He placed the plants either in optimal conditions or in saline soil and then tried to infect the plants with the mildew fungus.

Kissoudis discovered that one of the tomato lines was able to effectively defend itself against mildew in the saline soil as well, but that another line was not, allowing the disease to infect the plant. This means that one resistance gene may work well in stressed plants, while another may not.

During his doctorate research Kissoudis quickly became an expert in the field of plant resistance and ‘environmentally-dependent’ disease resistance in crops. Among other things, he published two review articles which provided an overview of the available knowledge from scientific publications and showed how they were connected. Kissoudis’ own research results have led to several other publications and there are more in the pipeline.