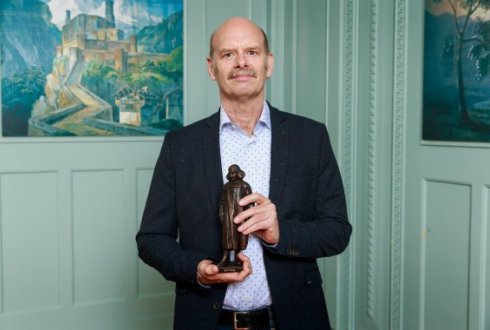 Microbiologist John van der Oost will use his Spinoza Prize worth 2.5 million euros to develop additional tools for cutting DNA. But he also wants to use the funds to stimulate the discussion on genetic engineering in secondary schools.

On 12 September, Van der Oost received the Spinoza Prize from research financier NWO for his research into CRISPR/Cas, a bacterial antivirus system that can be used to edit the genome of plants and humans.

The prize, which is the highest award in Dutch science, will allow him to broaden his research. ‘There are still various CRISPR variants in bacteria that we know very little about. We want to study those in more detail.’ Furthermore, he would like to research the Argonaute protein, which might serve as an alternative in the modification of DNA of microorganisms, plants and animals.

Van der Oost also wants to spend part of the funds on the creation of a synthetic cell. ‘I’m part of a large consortium that receives 18 million euros from NWO’s Gravitation programme to develop a synthetic cell. This is a lot of money, but it’s not enough.’ Van der Oost thinks that they will only succeed in building a living cell ‘if we use the evolutionary principles to arrive at a feasible system.’

Finally, Van der Oost also wants to revive the discussion on genetically modified organisms (GMOs). ‘Terrorism expert Beatrice de Graaf, who received a Stevin Prize from NWO earlier this year, developed a module that allows teachers in secondary schools to teach about to current events. The aim is to develop a joint module to get the GMO discussion going in schools.’

Van der Oost mainly intends to put facts on the table. ‘Life on Earth develops through cell division and the copying of DNA. During the copying process, small errors are made, and pieces of DNA are exchanged. As such, genetic modifications occur very often in nature. It is the source of natural variation. In that sense, we all are GMOs.’

> This article was adopted from Resource.wur.nl, the news website for students and employees of Wageningen University & Research.