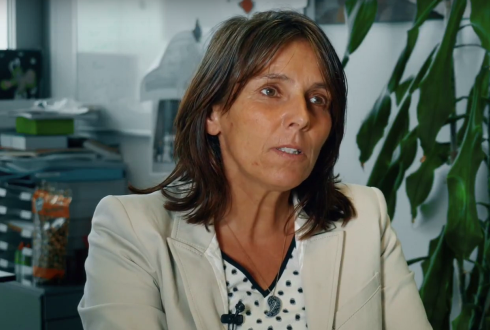 In addition to plastic in the oceans, plastic contamination in arable land throughout Europe and other parts of the world is a growing problem. No standards exist for these types of soil pollutants, nor for pesticide residues or their degradation products. For this reason, Professor Violette Geissen is calling for standards to be implemented. On 15 June, Geissen will deliver her inaugural address as professor holding a personal chair at Wageningen University & Research.

Plastic covers are used in agriculture, such as asparagus cultivation, to prevent moisture loss and weed growth and to retain solar energy in spring. In the Spanish city of Cartagena, an area spanning six thousand hectares is covered with plastic. In China, approximately twenty million hectares of arable land is covered with plastic – an area five times the size of the Netherlands. In addition, much of the world's plastic comes from landfills and sludge, which many countries use as fertilizer on agricultural land.

Microplastics can pollute agricultural land as well as surface and groundwater sources through erosion, gradual dispersion, sunlight and soil organisms. Earthworms can ingest microplastics, concentrate them in their cast and ultimately incorporate them into the soil. Wageningen researchers discovered that plastics are also found in the terrestrial food chain. Researchers found micro and macroplastics in the gizzard of Mexican chickens. 'Plastic is everywhere,' concludes Professor of Soil Degradation and Land Management Violette Geissen in her inaugural address entitled 'Healthy land, healthy people: a transdisciplinary approach.'

A similar story applies to pesticides and their degradation products, which can often persistin soils for decades. Pesticides are commonly used throughout the world with different quantities applied per hectare As part of a study in ten European countries, researchers detected 16 different compounds out of 30 compounds analysed in European agricultural fields. 'Only 34% of the samples were clean,' says Professor Geissen. The most common substances were glyphosate compounds (46%), DDT (25%) and fungicides (24%).

Glyphosate is a widely discussed pesticide and the most common herbicide in the world. In a Portuguese case study 2 mg/kg of glyphosate was detected in the soil. Glyphosate and AMPA, its main metabolite concentrate on the small soil particles that are susceptible for transport with wind and water erosion. This leads to a high risk of off site transport to water bodies or via wind erosion over long distances. Of the three thousand surface-water tests conducted in Europe, half of the samples contained AMPA. Glyphosate was also detected in 44% of the 180 urine samples taken from from European citizens

These crop protection products can spread as a result of leaching, rainwater runoff and seepage or can be transported on the wind. Some of these pesticides end up in the atmosphere as a result of drifting sand and soil cultivation. 'We don't know exactly how much ends up in our atmosphere or how pesticide compounds affect surface water, aquatic life or human health,' says Professor Geissen. 'No international standards are in place for plastic pollution or pesticide pollution in the soil. Some national standards do exist for a limited number of old pesticides, but it's high time for a new monitoring system.'

Professor Geissen and her colleagues are working on creating a monitoring system, after which they plan to develop soil recovery programmes in collaboration with the Netherlands Institute of Ecology (NIOO). In the meantime, sustainable agricultural-management strategies should be tested and promoted.

Check out the activity page for more information: