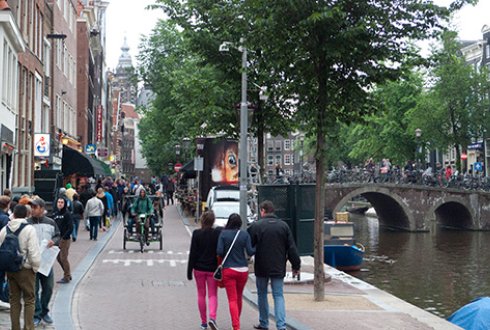 Thirty small weather stations have been set up in Amsterdam for the ‘Summer in the City’ project, enabling the Meteorology and Air Quality chair group at Wageningen University to collect inner-city data on temperature and humidity. The group is investigating the urban heat-island effect, which can be hazardous to people who live and work in large cities.

Urban climate, an extremely important aspect of human welfare, is not yet understood in detail. The climate in an urban area is quite different from that in the countryside. A city centre is significantly warmer than the suburbs and countryside. “This heat-island effect is becoming more important because urbanisation is increasing all over the world,” says Professor of Meteorology Bert Holtslag. “We expect the periods of extreme heat in cities to increase in both frequency and intensity due to climate change. This could have adverse effects on the urban environment as well as on the health of people living and working there. For example, a recent study of the heat wave that hit Europe in 2003 showed that some 70,000 deaths could be directly attributed to the extreme temperatures. In particular, vulnerable groups such as the elderly will suffer from the higher temperatures that are being predicted. However, it is also an economic problem because heat has an adverse effect on productivity.”

If we want to guarantee the quality of life in our city centres we will have to know more about urban heat development and how to deal with it. This calls for a different approach to architecture and design in city centres ("more green, more air") but we also need to understand the details of heat development much better. Bert Holtslag: “For the project ‘Summer in the City’ we are developing a system to collect detailed information on warm weather in cities. The measuring devices that are now in place in Amsterdam – and that were previously used in Wageningen and other locations – will allow us to collect data on the spatial variability of microclimates in the city. That is not only relevant for governments and health services that need to prevent or reduce the consequences of heat stress for city dwellers, but also for urban designers who can then be more responsive to the quality of life in warm summers when redesigning urban areas."

The Amsterdam Institute for Advanced Metropolitan Solutions, will be officially opened in Amsterdam on Friday 20 June. This new institute for applied urban technology and design will enable Wageningen UR, TU Delft and MIT in Boston to work together in a 'living lab' in which city residents are involved as testers, users and co-creators of products and ideas to make the city a better place to live in. The Meteorology and Air Quality Group will be giving a presentation during the opening