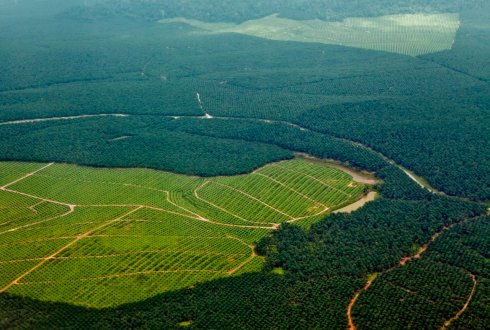 This blog post is part of our new series of Dutch blog posts on important issues from the field of environmental policy on NRC online.

You can find the original post (in Dutch) here.

“Sustainable palm oil? There’s no such thing, is there?” asked a friend when I told her I was researching how palm oil in Malaysia is being made more sustainable. “Palm oil depends on tropical rainforests being cut down which means orang-utans and Sumatran tigers disappear, and the local population is displaced to make way for vast palm oil plantations. So as far as I’m concerned, palm oil could never be sustainable,” she concluded.

“So in your view, should we stop using palm oil?” I asked her. “How would we produce our cookies, shampoo, detergents and biofuel, and what would happen to the farmers who depend on their palm oil plantations for their livelihoods? Rather than not using palm oil at all, we need to stop using unsustainable palm oil.”

Palm oil seems to be becoming increasingly controversial. It’s been used in all sorts of food products for over a century, but in recent years it seems to have become equated with environmental destruction. Various NGOs and even the French parliament have called for a boycott of palm oil. But would ending the use of palm oil automatically end the problems it's associated with? As a scientist, you try to examine this critically. To start with, it’s useful to get a few facts right. Oil palm trees are grown in plantations in countries located near the equator which have a high humidity and tropical temperatures. Originally they were mostly grown in West Africa, but today they are predominantly found in Indonesia and Malaysia, where they have become an important foundation of economic development. Oil palms become productive several years after being planted, and they continue to be productive until they are around 25 years old and have become too tall for harvesting. Oil palms are productive throughout the year, which means they yield a relatively large amount of oil per hectare. Palm oil is a vegetable oil used in the manufacturing of many products ranging from margarine to cookies, chocolate, detergents, shampoo and biofuels. It’s estimated that half of all products found in supermarkets contain palm oil. If we want to stop using palm oil, we will therefore need to switch to other vegetable oils (such as soybean oil, rapeseed oil or sunflower oil) because it's unlikely that demand for vegetable oils is going to slow down. But those other oils have various disadvantages: for example, their yield per hectare is lower, so you need an area five to ten times larger in order to produce the same quantity of oil. Soybean oil production uses controversial GM technology on a large scale. Soybean and rapeseed oil production also require more artificial fertiliser and pesticides. Furthermore, oil palm cultivation provides a livelihood for several million small-scale farmers in Indonesia and Malaysia. And finally, palm oil is exported not just to the Netherlands or Europe but in particular to India and China. In India, palm oil is the cooking oil used by the poorest segments of the population. Stopping palm oil consumption in Europe would therefore definitely not stop its production, and wouldn’t solve the real problem. But business as usual is a bad idea as well, because the problems caused by the current production system are becoming more urgent. The expansion of oil palm plantations is still the most important driver of deforestation in Indonesia, even though more than three quarters of that is caused by other factors such as the expansion of pastureland, timber plantations and other forms of agriculture. That’s why it’s more useful to think about structural solutions and to look for ways of making palm oil more sustainable.

We can’t make palm oil more sustainable without involving those who produce it, meaning small and large-scale producers in Indonesia and Malaysia. Dialogue and collaboration with them is essential if we are to find structural solutions that are ecologically sound as well as socially responsible and economically achievable. It’s important that this includes demonstrating the potential for improving sustainability. Sustainable palm oil production can be achieved by not cutting down any more forests to create new plantations. Existing plantations can be renewed after 25 years and when this is done with high-quality planting material and optimal management, productivity can be greatly increased. Plantations on peat soil contribute significantly to global warming and should therefore be avoided. Other cultivation techniques can also play a part, for example through the use of mixed agricultural activities which can replace large-scale monocultures, improve biodiversity and make farmers less dependent on a single crop.

Standards and labels have been developed to show consumers that these solutions are being used to produce sustainable palm oil. There’s the Roundtable for Sustainable Palm Oil (RSPO), for example, as well as certified organic palm oil and integrated supply chains producing sustainable palm oil. Unfortunately not all of these initiatives are equally trustworthy, transparent and effective, and improvement is needed in that respect. But it’s more useful to look for effective ways of differentiating sustainable palm oil from unsustainable palm oil than to push for boycotts. A boycott of all palm oil would have unintended negative social and environmental consequences, and wouldn't be effective in ending the destruction of tropical rainforests either.