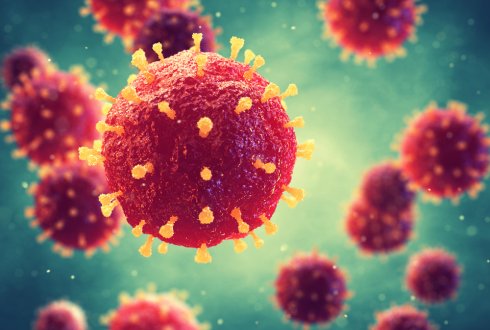 The health of people, animals, plants, and the environment is intertwined across the globe. Therefore, a Global One Health approach is necessary in order to prevent and combat infectious diseases. New molecular research techniques have been developed in laboratories, such as whole-genome sequencing and CRISPR-Cas. According to Prof. Wim van der Poel in his inaugural address as Professor by special appointment of Emerging and Zoonotic Viruses at Wageningen University & Research on 6 June, we should be using these as much as possible to discover, prevent, and control new infectious diseases.

Early this century, the outbreak of SARS made the global connection between humans, animals, and the environment suddenly and painfully clear. This infectious disease originated in China and spread like wildfire, leaving a great deal of public unrest and economic damage in its wake. “The SARS outbreak was an important wake-up call,” says Wim van der Poel. “It made it clear that different disciplines in healthcare and science had to work closely together if we wanted to prevent new outbreaks.”

Since then, epidemiologists, physicians, veterinarians, and nature and environmental experts have embraced the One Health principle. The World Health Organization (WHO) created a list of diseases that had research priority, because they posed a risk to public health, could potentially lead to an epidemic, and there were still insufficient measures to combat them. In 2018, “disease X” was added to that list, a code name for an unknown virus that could cause an epidemic in the future. The goal was to make everyone aware that we should also be preparing for outbreaks of unknown infectious diseases.

Identifying new, dangerous “X” viruses in time is a huge challenge. “But fortunately, there has also been a revolution in the laboratory,” says Van der Poel. “Thanks to new molecular research techniques, our chances of successfully discovering new viruses have risen substantially.”

Polymerase chain reaction (PCR) is a technique that has existed for some time, but is still of enormous importance. This technique makes it possible to multiply the DNA in a sample. This is necessary, because samples often contain too little DNA to work with directly. In metagenomics, researchers can read thousands of DNA sequences simultaneously. This yields an enormous quantity of microbiological data in a short period of time and provides a great deal of information on the evolution of a virus. When used in conjunction with the CRISPR-Cas technique, this makes it possible to precisely “cut and paste” genetic material. Ultimately, this reveals new starting points for future laboratory diagnostics.

Infectious diseases in biological systems are dynamic: they can change as well as mutate into new diseases. Professor Van der Poel will also continue devoting a great deal of energy to collaboration at both the national and international levels. Van der Poel: “By combining different expertise, we can develop new scientific methods to respond to the challenges faced by Global One Health.”

Van der Poel intends to focus his research on zoonoses, which are infectious diseases that are transmitted from animals to humans, such as Ebola and avian influenza. Nearly 70% of all recently discovered infectious diseases in humans originated in animals. In the Netherlands, this is particularly important, because our country is densely populated with people, livestock, and pets.

One zoonosis that Van der Poel is concentrating on is Hepatitis E. Pigs are able to carry the virus without suffering from any of its symptoms. People typically become infected by eating undercooked pork and can become extremely ill as a result. In recent years, knowledge of Hepatitis E has grown exponentially, but there are still significant questions to be answered, so research will continue in the years to come.