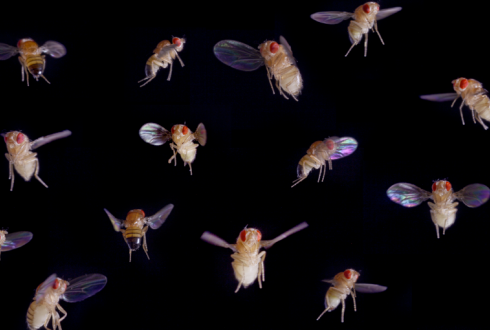 A fruit fly can change its flight direction in less than one hundredth of a second. But how does it do that? A firm understanding of how fruit flies hover has emerged over the past two decades, whereas more recent work focussing on understanding how flight manoeuvres are performed. In a review article, as part of the special theme edition of Philosophical Transactions B, Florian Muijers of Wageningen University and Michael Dickinson of California Institute of Technology, describe how flies manipulate wing movement to control their body motion during active manoeuvres, and how these actions are regulated by sensory feedback.

Why should we care about how a fruit fly flies?

Most research done on fight movements are used for implementation in flying robots. Why don’t we take powerful dragonflies, elegant butterflies or economically relevant honey bees for this research? First, we know much about the genetic of Drosophila, which helps us answer questions related to flight physiology, neurobiology and biomechanics. A second reason is that fruit flies don’t need allot of space to fly well and because fruit flies are most active at dawn and dusk, they are also adapted to fly in the relatively dim conditions of laboratories. Therefore, it is mainly on fruit flies where a lot of research has been done.

Fruit flies move their wings back and forth rather than up and down. This it is remarkably similar to what has been observed in hummingbirds, honey bees and hawk moths. Whether this pattern is optimal with respect to energetics is not entirely clear; nevertheless, the similarity among species is noteworthy and suggests that a combination of physical and biological constraints restrict the solutions available to hovering animals.

Like many species of flies, fruit flies employ a flight pattern consisting of straight segments interspersed with rapid changes in heading termed body saccades. They, like a helicopter, pitch their nose-down to accelerate and turn like an airplane when changing direction. In the situation for escape manoeuvres, the fly must direct its motion away from the location of the looming threat. This flexibility in the escape response demonstrates that flies quickly transform visual information into a motor pattern that generates the appropriate combination of movements. To keep in balance during such manoeuvre, the fly must perform corrective movements to control its body orientation. This mechanism uses input from different sensors: the antennae which can detect bilateral differences in airspeed, the visual system which can detect the optic flow created by the fly's forward motion, and the halteres which are thought to act as gyroscopes by detecting Coriolis forces resulting from body rotation. This allows a fly to correct itself in less than a hundredth of a second.

This article is part of the themed issue ‘Moving in a moving medium: new perspectives on flight’.

The aerodynamics and control of free flight manoeuvres in Drosophila