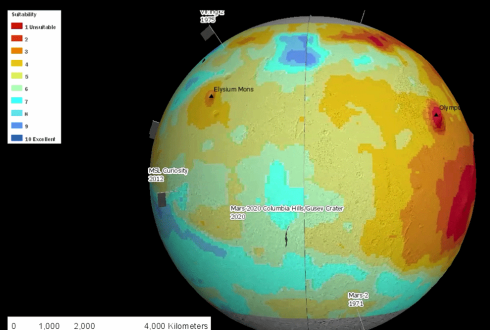 Selecting the perfect landing site will be essential for the successful establishment of the first Mars colony. Growing food crops will be one of the key tasks for the astronauts. Scientists of Wageningen University & Research have identified places on Mars that are favourable for plant species to grow. Even though plants will be grown indoors, resources as regolith and ice will be used. Wieger Wamelink and student Line Schug developed an optimal 3D Mars-wide landing map, seen from a plants perspective. Some of the ideal landing places coincide with past and planned future landing sites.

To estimate the optimal landing places on Mars the researchers used several of the Martian maps showing essential information that are made freely available by JPL, the Arizona State University and NASA. “Without them this endeavour would not have been possible”, explains Wieger Wamelink.  The maps contain information about mineral content, which can for example be related to calcium and heavy metal content. But also element maps for potassium, chloride, iron and silicon and maps for radiation level, climate, terrain including altitude and cosmic radiation were used.

Not too much heavy metals

High levels of heavy metals in the soil and strong radiation make a location unsuitable for establishment, "explains Line Schug. High contents of heavy metals and high doses of radiation make a location unsuitable for colonisation, "explains Line Schug. "While we see high temperatures or calcium levels and a relatively flat terrain as positive."

The maps were merged and the average score was calculated, with high scores marking the best landing sites from a plant’s perspective. In the past the Mars Pathfinder and Viking 1 landed at hotspots to establish a colony, however, MSL Curiosity and Viking 2 landed on less favourable spots.

Research on food for Mars and Moon

To feed the future humans living on Mars or the moon the Wageningen research project ‘Food for Mars and Moon’ aims to set up a sustainable agricultural system. It is based on the presence of soils and water (in the form of ice) on both Mars and the moon. For this Earth-based research, the researchers are using soil simulants delivered by NASA. The simulants originate from a volcano in Hawaii (Mars) and a desert in Arizona (moon). The experiments started in 2013. Nowadays the team is able to grow over a dozen crops; the only species that has resisted their efforts so far is spinach. However crops such as green beans, peas, radish, tomato, potato, rucola, carrot and garden cress all seem possible. The crops were analysed for heavy metals and also alkaloids to check their safety for human consumption. After the plants had passed these tests we organized a dinner based on the harvested crops for the people that supported our research via the crowdfunding campaign. Recently we proved that Earthworms can live and propagate on Mars soil simulant, an important step towards a sustainable agricultural ecosystem necessary for growing crops on Mars.

More information on agriculture on Mars