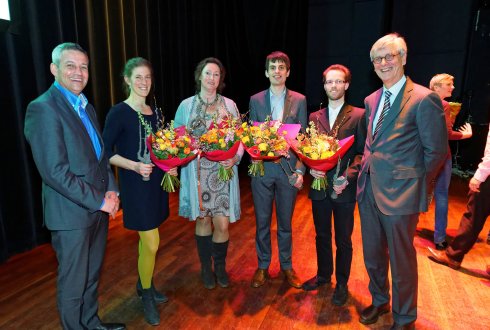 The winner of the Overall Thesis Award, Uroš Cerkvenik, a Master‘s student of Biology, received €1000, and there was €500 for each of the other winners. In addition, everyone received a bronze sculpture of the ‘Wageningen tree’ by Sjoerd Buisman, plus a diploma and a jury report.

The jury concluded that Cerkvenik had tackled a fundamental problem in insect biology: how do insects determine where sound comes from? He used crickets for his study. According to the jury, the thesis has important implications for the development of small acoustic sensors and is a good example of new insights being gained from evolution biology.

The other winners and their thesis subjects were:

Nick Middeldorp, International Development Studies: In Honduras it is a sin to defend life’: An ethnography of the discourses, practices and dangers of opposition to mining in Honduras, under the supervision of Prof. Bram Buscher, Sociology of Development and Change Group.

The Wageningen University Fund received 23 nominations in total. In forming their judgement, the jury paid particular attention to technical/scientific quality, written presentation, applicability in practice and the quality of the research in the academic field in question. The KLV Wageningen Alumni Network donated the prize money.