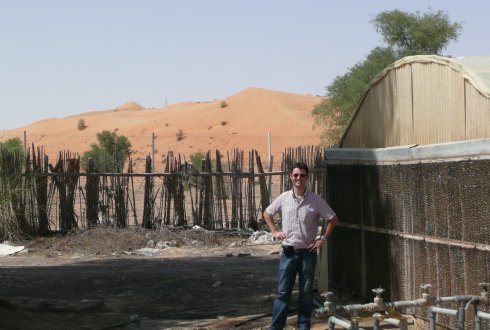 In many Arab countries the conditions for growing vegetables are difficult. Heat and drought make it almost impossible to realize high productions. In addition, growers also use many pesticides. The Greenhouse Business Unit at Wageningen University & Research tries to improve the sector with targeted knowledge transfer.

WUR has been active in the Arab region for about 12 years. For example, research centers were designed in Abu Dhabi (United Arab Emirates) and Riyadh (Saudi Arabia).

The availability of water is a major problem almost everywhere. For example, for a city like Riyadh, desalinated seawater is being used as a source of drinking water. Moreover, governments want to be less dependent on imports of fruit and vegetables from other countries, and want to rely more on their own production, especially since the food crisis a few years ago.

So there is still a world to win. In the research center in Saudi Arabia, for example, the focus is on sustainable cultivation: less use of water and pesticides. In addition, research is being carried out into how production and food safety can be increased.

Knowledge exchange is essential for the step forward in Saudi Arabia. That is why WUR recently started a project to inform more growers and their employees about the new cultivation methods. To this end, demonstration companies are set up, where improved cultivation techniques are compared with the existing methods, not only practically but also economically.

More Arab countries know how to find WUR. WUR is now also active in Jordan and Lebanon, among others. There, not only the harsh growing conditions play a role in food production, but also the refugee problem.