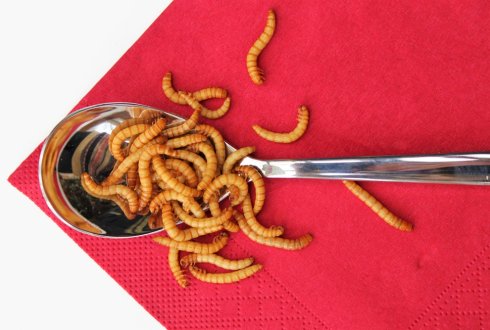 Edible insects are known as a good source of animal protein and several other nutrients, amongst which several minerals and vitamins. Until recently vitamin D was not part of that list. Scientists of Wageningen University & Research have now empirically shown that certain insects can be a very rich source of vitamin D if they are exposed to ultraviolet radiation. The researchers presented their results in the renowned scientific journal Scientific Reports.

Vitamin D is essential for the human body and a deficiency is associated with a variety of chronic diseases. A special characteristic of vitamin D is that it can be obtained via the diet, but can also be synthesized in the skin. However, this synthesis is only possible when sufficient solar energy (ultraviolet radiation) reaches the skin. This is not the case during winter, and synthesis is severely impaired when the skin is covered by cloths or sunscreen, or in pigmented skin. This causes vitamin D deficiency to be widespread, especially amongst people that live in countries at longer latitudes.

The research team exposed four insect species to ultraviolet radiation and subsequently determined their vitamin D concentrations. Three of the four investigated species had strongly increased vitamin D levels compared to their unexposed counterparts. In one of the species, the yellow mealworm, the vitamin D concentration in exposed specimens was 60 times higher than in unexposed specimens. These UV exposed yellow mealworms contained similar amounts of vitamin D as salmon, tuna and mackerel, making these mealworms one of the few good dietary sources of vitamin D.

Mealworms are a rich source of vitamin D

Previous studies showed that mealworms are an environmentally friendly alternative for conventional meat, are a rich source of animal protein, and are able to efficiently utilise industrial by-products. This study shows that they can also form a rich source of vitamin D. The researchers expect insect producers to implement the results of this study on the short term, thereby further increasing the nutritional value of insect-based products.

Read the article on nature.com.