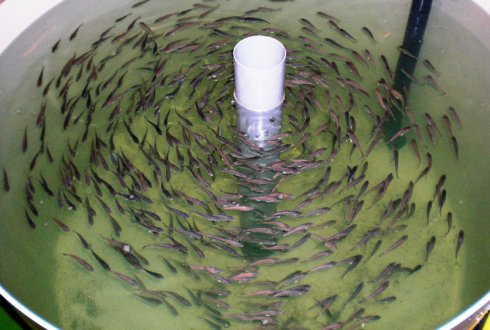 More than half of the fish consumed worldwide is cultivated in ponds or tanks. And the percentage of cultivated fish in relation to wild fish is increasing. The scale on which fish are currently farmed makes it necessary to protect them, by means of vaccination, against disease and premature death. An understanding of the immune system in fish will hopefully lead to effective vaccination methods and healthy farmed fish. That is the view Professor Geert Wiegertjes expressed on 15 May upon formally accepting the post of personal Professor of Cell Biology and Immunology at Wageningen University.

The essence of an immune or defence system is the ability to distinguish between the body’s own cells and those of another organism. The immune system is to some extent genetically determined but it also has an acquired or learned component. The acquired defence mechanism works with a particular form of memory. Until recently it was assumed that this did not apply to the defence mechanisms we are born with. However, new research has shown that this component also has a form of memory. That opens up new perspectives for vaccination and other measures for enhancing the immune system in fish. Geert Wiegertjes explained this in his inaugural address Good memories for details improve fish health and revealed that vaccination is generally seen as the most successful medical development in healthcare history.

There are three possibilities for vaccinating fish in aquaculture. They can receive an injection, but this is only possible for the more expensive types of fish, Professor Wiegertjes stated. Young fish, especially, can be vaccinated by getting them to swim through a small tank containing dissolved vaccine. And a third method is to administer vaccine in the feed. This last method, Wiegertjes said, is the best but also the most difficult: "This method does not cause the fish any stress but the final outcome is always uncertain.”

The need for cultivated fish as a protein-rich source of human food is growing steadily. To keep these fish healthy up until the consumption stage, it is very important to vaccinate against viruses and parasites. Professor Wiegertjes and his international colleagues do a great deal of research into the immune systems of cultivated fish. At present they are focusing on just a few economically important species, such as carp in Poland, Czech Republic and China, and Atlantic salmon in Norway, Scotland and Chile. Species such as pangasius and tilapia from south-east Asia are recent additions.

Besides the applied research on what is called ‘production fish’, Wiegertjes and his colleagues perform more fundamental research in aquatic biology. They use zebrafish – a vital biological model in this discipline – to do that but also to research human health. Another advantage, according to Wiegertjes, is that zebrafish are genetically very similar to the carp.

Geert F. Wiegertjes (born in Hoogezand-Sappemeer in 1963) has been a personal Professor of Cell Biology and Immunology at Wageningen University since 1 September 2013. He studied in Wageningen and obtained his doctorate here in 1995 on the immunogenetics of disease resistance in fish. In his teaching and research, Wiegertjes mainly focuses on fish health in general and on immunity against fish pathogens in particular.