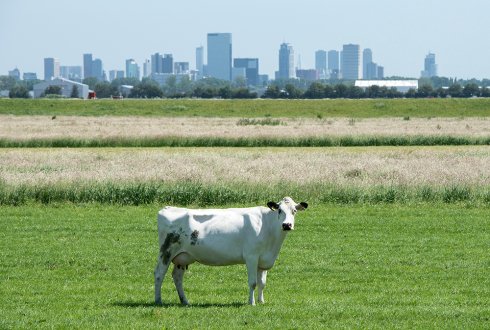 Alfons Beldman and Jan Willem van der Schans are researchers at Wageningen Economic Research. They work closely on programmes to help dairy farmers make considered choices when they are about to take over a business, for example, or want to move in a new direction.

Beldman, commenting on the success of the Netherlands as the second-largest agricultural exporter in the world, points out the flipside:

“I think the Netherlands should be focused on exports with added value rather than just maximising exports. But what can an individual dairy farmer do? That's a difficult one. One option as a business owner is to withdraw from the mainstream supply chain. You can then decide on and handle your own sales and switch to a smaller supply chain or even handle your own processing. There are examples of individual business that do that, such as Remeker cheese. That’s a business that has been processing its own milk for a long time, makes cheese and has found a high-value market niche. This is an organic dairy entrepreneur who has come up with and developed a strategy by himself, long before anyone was talking about it, and who hasn’t just followed the rest of the herd.”

What WUR can do in this area is to analyse the differences between various businesses and make use of those differences. Individual business owners will sometimes want to find new business models, and WUR can help them by providing methodologies for identifying a suitable model, and training to implement it. Such a business owner will then need to take a good look at himself, and at the business, and ask what he's good at and what he wants. According to Beldman, this is a crucial objective:

Wageningen Economic Research has developed a variety of approaches to support business owners in making these kinds of strategic choices. Interactive Strategic Management and Business Model Innovation are two examples of this. Both of them are components of the Rabo Successors Perspective, a programme from the major agriculture related bank Rabobank, providing training to young farmers who are about to take over a business. They look at whether a business takeover is achievable and what the best strategy for it would be. Those are the turning points, when long-term decisions are made about a business.

“We offer concepts and we train the trainers. The Rabo Successors Perspective has been running since 2006 and we provide the strategic management tool for that. We train the trainers and we’re involved with evaluations. For us it’s about the combination of 'hard and soft’. We have data and analyses, but we also look at the business owner himself, at his skills and competencies and ambitions. So it's not just about the quantitative aspect.”

According to Beldman it’s crucial for farmers to make considered decisions, for example when deciding on a strategy and a particular supply chain. The Rabo Successors Perspective is one resource, along with other methodologies such as Interactive Strategic Management and Business Innovation:

“For us it’s not about getting everyone out of those big supply chains. It’s about awareness raising. The economy is what it is, and that whole structure can be complicated for business owners to grasp. So if you’re doing well in the supply chain you’re in, and doing better than those around you, there’s currently no immediate incentive to get out of that chain and you might stick around for a long time. But you should make sure you have a few other options up your sleeve so that you’re not fixated on a single solution and you can also absorb knock-backs and have a robust, resilient business. Alternatively, you can go your own way by taking part in a short supply chain, or organising your own sales. But doing that does ask a lot of individual business owners. It means you need to understand not just how to produce grass and milk cows, but also how to make cheese and get it sold. Some business owners do that very well and are very successful. But it’s still a relatively small group who manage to pull all that off.” Even within the realm of short supply chains there are also specialised partners you can work with to share some of the burden. These might include service providers who specialise in decentralised and diffuse logistics.”

A few years ago the municipality of Rotterdam asked Wageningen Economic Research to help it think about how to stimulate business innovation within the agriculture and horticulture sector around Rotterdam. Specifically, it was about looking at how to construct short supply chains. Jan Willem van der Schans, another researcher at Wageningen Economic Research, developed a masterclass in short supply chains, which enabled business owners to learn both from each other and from experts. Other cities and regions, such as EdeBarneveld and Rivierenland, have since shown an interest in this too. Beldman says: “Our methodologies encourage governments and the private sector to look at their local environment in a different way.”

Van der Schans adds: “It’s about working with farmers to develop new revenue models. We consistently take the market as a starting point and work back to the business. Which customer segment are you targeting? What problem are you solving for your customers? In practice a change can manifest itself not just in product differentiation (such as the Remeker cheese example mentioned earlier) or diversification (multifunctional agriculture such as the Paradijs farm and day care centre)[1] but also by taking part in the sharing economy. An example of this would be the practice of agistment, where beef cattle are allowed to graze on a bit of someone’s land that is not being used for anything else. That person is then given gifts of meat packages by way of thanks.”

Wageningen Economic Research helps farmers pitch their ideas to financiers. Often those financiers are not banks, but venture capital. This means that early customers also take on the risk of the product launch. Van der Schans says: “We’ve invested heavily in Business Model Innovation in recent years and are working on interesting projects through that. Working with fresh produce buyers for the retail market, we try to inspire farmers to innovate, which then gives them a competitive edge against other retailers with a less innovative range. You could call this “farm acceleration” because we're working with existing farmers, not new start-ups. Based on what we’ve seen at the masterclasses, fresh produce buyers for the catering or retail market are very enthusiastic about product and concept developments by farmers.”

One of the first questions Beldman puts to business owners is: ‘Why are you a farmer?’ It often takes them by surprise, because they will have been expecting specific questions about their business and the future. But according to Beldman, that core motivation is very important to making the right choice of strategy. It’s where it all starts. Some business owners know exactly why they are a farmer. For example, they might want to produce proper food and have a real sense of what consumers want. Others are more closely bound to primary production and enjoy turning grass into milk. What it then gets used for may still be important, but that’s not their main interest. So someone’s ambition is an important starting point for choosing a strategy:

“We have a lot of figures and are able to help assess how well they're doing, and indicate where improvements could be made. Our strength lies in that combination.”

Beldman gives an example of how such a training programme can influence someone: “A few years ago there was a dairy cattle farmer who’d been on one of these training programmes and it had made him struggle with the issue of his work/life balance and whether he should take on another employee. During a group session someone mentioned that he didn’t necessarily have to employ a permanent member of staff. Another solution was to hire a milker once a week so that on Wednesday afternoons, when the kids had their swimming lessons, he could take time off.”

Beldman later bumped into that same business owner on the street in a very different context. The man came up to Beldman and started talking about that strategy training programme and how he still had those Wednesday afternoons off. For him it wasn't about how much money the training programme had generated, or how successful his business was, but just that he'd been able to make that tiny change.

Subscibe to our social & economic newsletter for monthly refreshing insights!