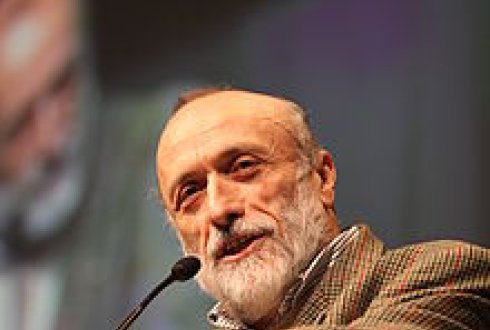 At the ceremony of the Johannes van Dam award that was granted to Carlo Petrini, Jury chair Louise Fresco honored him in her speech. She said that Carlo Petrini has singlehandedly changed our thinking about food and society in a fundamental way.

"In reaction to the opening of a fast food hamburger outlet next to the Spanish Steps on the Piazza di Spagna, an iconic site in the centre of Rome, he coined the term SLOW FOOD. From 1986 onwards he has contributed numerous articles on food and taste and has created a worldwide network of those who want to explore the roots of food. The Slow Food movement now exists in over 50 countries with publications in many languages about traditional, local recipes and products such as cheese. In the last ten years, the Terra Madre conferences were held, where thousands of farmers, cooks and consumers meet. Moreover, Carlo Petrini also created the University of Gastronomic Sciences in the North of Italy."

She continued: "The term SLOW has now permeated nearly every realm of our society: we have slow cities, slow travel and tourism, and even slow working. It has become an iconic term to counter the speed of the hasty, media driven world of today. Even if it is difficult to define SLOW exactly, the intention is clear: to live, eat and work in a meaningful and mindful way with attention to details, to the here and now."

Louise Fresco recognized, on behalf of the jury, that slow food is not exempt from criticism because of its elitist image and its emphasis on taste. “We believe in the right to enjoying food” the key statement of the movement, could be easily misinterpreted. She said that the emphasis on artisan production has been too rigid in the past. "Indeed, as little as five years ago Johannes himself wrote an article about the lack of support for Slow Food in The Netherlands, and the dominance of Italians in the movement, whereas may of the ideas already existed even at the level of detailed descriptions of traditional foods. Furthermore, slow food, fair trade and sustainability do not automatically coincide. But Johannes also lauded the way in which Slow Food became a movement that touched the young and the ordinary people, and not just the establishment."

The jury report said that Petrini deserves the Johannes van Dam Award because, just like Johannes, he has a strong and independent mind, he does not speak the language of the majority but instead follows his own vision. Both men also have tried to find some of their foundations in science and research. Louise Fresco stated that she firmly believes that the continuous dialogue between society, and particular innovators like Carlo, and science is the only way forward to balance tradition and the modernisation that is needed to feed the entire world, and not just the middle classes in the developed economies.