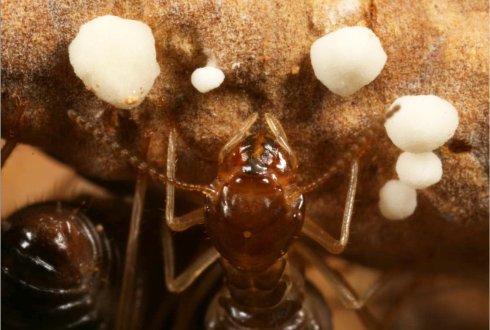 Other living creatures were involved in agriculture way before humans. Termite species in Africa and Asia have been cultivating fungi for consumption for tens of millions of years. And they do it well as the harvests of a colony retain the same high yield level for up to several decades. How do termites achieve this? Millions of years of symbiosis between termites and fungi may hold the key to higher agricultural yields, according to evolutionary biologist Duur Aanen of Wageningen University. His research proposal was awarded with a Vici grant of 1.5 million euros from the Netherlands Organisation for Scientific Research (NWO).

Duur Aanen is fascinated by the question how termites manage to achieve these long-term high food yields. “Looking at a colony of termites you can see hundreds of thousands of workers that are extremely busy maintaining their own fungus gardens. As a group, their productivity is unprecedented. However, when we imitate this monoculture in the lab, the yield drops considerably after several generations. We think this is caused by unconscious selection of unwanted properties. So the question is: what do the termites do differently to ensure that their success continues for decades? It’s clear they make the right selection, but we don’t know how they do this.”

Although, as a biologist, Aanen is mainly attracted to the fundamental character of the research, he believes that the resulting knowledge will also find its way into practice. He mentions two interesting applications. “Firstly, fungi are increasingly being used by industry; in the production of enzymes, for example. And of course, there are also cultivated edible mushrooms, the fruiting bodies of fungi. For both applications we sometimes see a strong reduction in productivity, which is probably due to unconscious selection. For companies it is very interesting to see how one could maintain high productivity, as achieved by termites.”

A second link to practice is that this research will contribute to the knowledge needed to cultivate the termite fungi by humans. “Once a year, the fungi develop mushrooms from the termite colonies, and these mushrooms are being collected and traded as a popular and highly nutritious food source in Africa and Asia. Scientists have yet to successfully cultivate these mushrooms in the laboratory. Once we know the conditions for mushroom formation, we may be able to do the same. And that would be highly interesting, as these mushrooms are a very tasty food source that is rich in protein.”