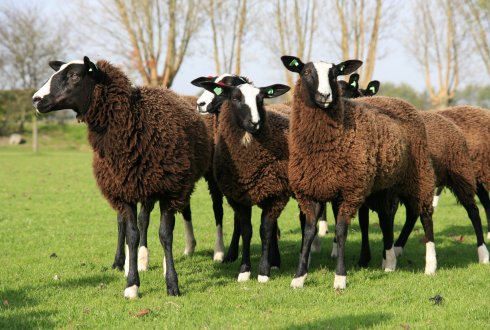 In 2019 the Centre for Genetic Resources, the Netherlands (CGN) analyzed the rare Dutch population of Black blazed sheep population registered at both flockbooks. In order to maintain those small populations it is important the current exchange of breeding animals between the two flockbooks is maintained.

The population was analyzed based on all the pedigree data together, from the Nederlandse Zwartbles schapenstamboek (NZS) and the Zwartbles fokkersgroep (FG) together. The number of animals, born individuals and rate of inbreeding were calculated and simulations has been done to find out whether or not the rate of inbreeding would change with more or less exchange of breeding animals between the two flockbooks.

De breed has a rare status with a total population of 1,445 registered, purebred breeding females, which is far below the set norm by the FAO of 3,000 animals. Furthermore, the already small population is divided by two different flockbooks, about 80% of the Black fazed sheep are registered at NZS and the remaining 20% is registered at the FG. Currently there is some exchange between both populations. During the last period about 95% of animals registered at NZS are offspring of NZS parents and about 5% of the NZS animals originate from parents registered at FG. The other way around, 35% of the FG born animals have parents from the NZS flockbook and 65% of the FG animals originate from the same FG flockbook registered parents.

Advise for the future

The analysis of in total 90,000 sheep (born between 1987 and 2018) showed an higher rate of inbreeding (0.82%) in the last period from 2015  to 2018. This is far above the FAO norm of 0.5% per generation. Based on the results of the simulations CGN advises the flockbooks to maintain the current exchange of breeding animals as a minimum. Especially for the Zwartbles fokkersgroep it is important to use breeding animals from the Nederlandse Zwartbles schapenstamboek.