The executive board of Wageningen University & Research (WUR) has appointed Prof. Dr. Mangala Srinivas as Professor and Chair Group Leader of Cell Biology and Immunology. She succeeds Professor Huub Savelkoul, who is now Personal Professor. The appointment of Srinivas has commenced on May 1.

In this new position, Srinivas will work towards her vision: optimising advanced (immune) therapies, while being a responsible scientist and mentor. 'My research is focused on optimising immune modulation through multifunctional, multimodal nanotechnology-based imaging agents for applications such as translatable cell tracking, and drug delivery in vivo', says Srinivas, 'and adding imaging functionality to biomaterials such as cell delivery matrices or drug depot formation in plants'.

Mangala Srinivas (1980) completed her B.Sc. (Honours) at the National University of Singapore. From there, she went to Carnegie Mellon University (Pittsburgh, USA) for her Ph.D. She has worked at the Department of Tumour Immunology at the Radboud UMC in Nijmegen. She is currently CSO of Cenya Imaging BV, a company she co-founded based on her work at Radboud UMC.

Srinivas is very active in the Young Academy of Europe (YAE), having served on the Board for the last 5 years, including as Chair. The YAE works on science policy at the European level, and other issues relevant to younger academics, including Open Science, gender equality and assessment and rewards. Srinivas: 'It boils down to 3 simple words, that I hope will define my career at WUR: grit, grace and gratitude'.​ 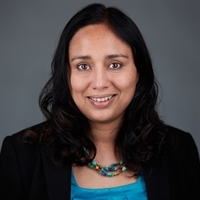 More information about the Chair group: