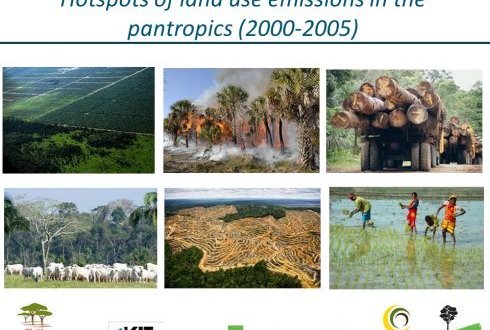 According to the most recent Intergovernmental Panel on Climate Change (IPCC) Assessment Report, global greenhouse gas emissions must be cut by 41-72% below 2010 levels by 2050 and global emissions levels must be reduced to zero (a balance between sources and sinks) by 2070 in order to have a likely chance of limiting the increase in global mean temperature to 2°C. This requires unprecedented changes in all the emission sectors, particularly in energy systems and improved land use management practices. The land sector accounts for about a quarter of net anthropogenic GHG emissions, mainly from deforestation, forest degradation, agricultural emissions from soil management practices, and livestock. The land sector is key in global mitigation strategies since it can potentially contribute with 20-60% of the cumulative abatement to 2030.

Not surprisingly, the Paris Agreement endorses emissions mitigation in the land sector and long-term storage in biogenic carbon as necessary means to achieve greenhouse gas neutral economies in the second half of this century. Countries have readily included their land sector as fundamental pillars of their mitigation commitments through their Nationally Determined Contributions (NDCs). Tracking progress of these commitments requires shared understanding of mitigation potentials, trust in data and associated uncertainties and implementation assistance at local, national, and landscape scales.

In spite of the importance of this sector, emissions from land activities still hold the largest uncertainties of all the emission sectors, and data comparability among countries and regions are jeopardized by methodological and definition inconsistencies. There was a need, therefore, to produce a consistent dataset with land emissions and associated uncertainties for key land gases (CO2, CH4, N2O and CO2e) that allowed country comparability, offered new data for countries with limited capacities, and approached the topic of uncertainties in a consistent and robust manner.

Our research contains a spatially detailed benchmark for monitoring progress on reducing emissions, including locations of hotspots of emissions in order to assist national policy makers, investors and other decision-makers who seek to understand the mitigation potential of the AFOLU sector.

With the financial assistance of CCAFS and led by CIFOR, Wageningen University & Research, and KIT, novel datasets on land emissions and uncertainties (Figure 1) as well as on the leading emission sources (Figure 2) have been produced in a spatially explicit manner (0.5°), for the tropics and subtropics -where data are more scare and more uncertain- for the period 2000-2005.

Need for information that countries and policy makers can use

Datasets can be useful to a diversity of stakeholders:

What the data say

As shown in Figure 1, there are land sector emissions hotspots on all continents. Particularly important areas are evergreen rainforest deforestation in Central and South America, fire in dry forests and woodlands in Africa, and forest and agricultural emissions in Asia. Higher emissions from forests coincide with higher uncertainties (Figure 1), highlighting the importance of agricultural hotspots as mitigation targets since their uncertainties are smaller and, therefore, could result in more effective mitigation action. Considerations on technical and economic potentials, as well as on the social and ecological services of forests would, however, turn forests back into the priority list of mitigation targets.

Figure 2 helps navigate decision makers on which emission sources should be first prioritized under mitigation action. In general terms, forests are the predominant source of land emissions in the tropics (75% of the total CO2e AFOLU budget, and 69% for CO2) due to deforestation and forest degradation (considered as fire and wood harvesting in forests) (green colours in Figure 2) (i.e. Arch of deforestation in Brazil, Miombo dry woodlands in Africa, palm oil expansion and peat fires in Indonesia and Malaysia). Certain regions are led by livestock emissions (red colours) (i.e. subSaharian and upper tropical belt in Africa) and/or an equal contributions of livestock and cropland emissions (pink colours) (i.e. Southeastern Brazil, Northern Argentina, India, and hotspots in Indonesia, Viet Nam). For decision makers in Asia, hotspots of cropland emissions in Asia, particularly paddy rice (blue colours in Figure 2) should also be targeted in mitigation action. Non-CO2 agricultural emissions contribute about 25% to the total gross emissions, with livestock (15.5%) and rice (7%) as the principal emitters. (Table 2 in publication).

Implications for mitigation in the agriculture sector

Optimal mitigation scenarios would focus on areas with large emissions and low(er) uncertainties. These areas include agricultural hotspots (croplands, paddy rice and livestock) without very high levels of forest emissions, such as parts of India, southeastern Brazil, northern Argentina, southern parts of the Democratic Republic of Congo, Zambia, and Angola. Policy-makers can use this data to maximize mitigation potentials while also taking into account socio-economic, technical, or ecosystem services considerations.

As pointed out in our paper, research has shown that agricultural intensification and the use of available non-forest land offer opportunities for agricultural mitigation of up to 1 PgCO2e. This value coincides with sectoral analyses for an aspirational mitigation for agriculture for 2030 that would keep agricultural emissions in line with the 2-degree warming limit.

Data limitations and next steps

This paper presents an assessment of gross emissions for the tropics and subtropics, excluding sinks (e.g. regrowth of cleared forests or burned areas, growth of standing forests, and soil carbon storage).  Gross emissions assessments are useful for designing mitigation action and advancing on mitigation implementation because they offer direct information on the emissions sources that may be changed through policies and measures to enhance and promote mitigation.

Net emissions are important since countries must report their mitigation commitments considering their sinks (under the UNFCCC). In our study area, for the period 2000-2005, the major sink contribution would relate to the growth of standing forests, since regrowth after deforestation and disturbances represent small contributions (exceptions being active afforestation in India and Viet Nam).

A preliminary -not yet published- research on the potential sink of standing forests in the tropics and subtropics (Figure 3, unpublished) shows that hotspots of emissions and associated uncertainties would remain the same as identified under the gross budget (Figure 1) since sinks do not compensate for emissions in these hotspots areas.

The temporal scale of our study 2000-2005 does not capture current trends, but hotspots of emissions are unlikely very dynamic at the spatial scale of our research (ca. 50km) since they respond to socio-economic and climatic contexts that do not change in a few years.  Therefore, while our data represent a historic benchmark for monitoring progress on reducing emissions, it can also navigate current mitigation decisions and assist current review processes on national greenhouse gas emissions and NDCs commitments.

This work was carried out as part of the low emissions agriculture flagship of CCAFS, and its Standard Assessment of Agricultural Mitigation Potential and Livelihoods (SAMPLES) initiative.

Authors of this article come from the following institutions:

This blog was produced and lays in CCAFs address