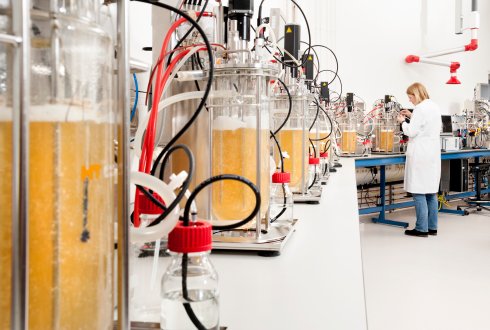 Scientists from Wageningen University & Research, in association with oil and gas company Total, have developed a new process for producing organic acids via a biotechnological method. The discovery of the Monascus ruber micro-organism proved to be the crucial step in the new process. The fungus is extremely suitable for producing organic acids in large-scale industrial fermentation processes. Moreover, the polylactic acids which result from the process are bio-degradable and have a range of interesting new properties.

“Total contacted us based on its interest in the sustainable production of chemicals, including organic acids from biomass,” says Professor Gerrit Eggink, account manager for the bilateral project. “These acids can be used as building blocks for polymers such as polylactic acids, among other things. The downside of the micro-organisms that are currently being used is that they grow at high pH levels. This makes the recovery of organic acids expensive and results in unwanted residual waste, including gypsum. Total asked us to find a micro-organism that grows at low pH levels and is also resistant to high concentrations of organic acids.”

Wageningen Food & Biobased Research scientists mapped the genome and metabolic routes of several promising micro-organisms in the Wageningen lab, as Ruud Weusthuis, the project leader, explains: “We tested a wide range of micro-organisms and eventually made a choice based on several properties: the growth speed at high acid concentrations, genetic accessibility, patentability, and safety. The Monascus ruber fungus stood out in a positive way. We then looked at which genes had to be switched off or, in contrast, introduced to trigger the production of lactic acid. At the same time, we applied laboratory evolution to enable the microorganism to perform under optimal conditions. This way, we managed to make the Monascus ruber grow at very low pH levels, while producing organic acids and tolerating high concentrations per litre.”

Eggink is proud of how the project with Total developed: “The cooperation was excellent. We took a wild organism from nature without knowing where it would lead, which demanded trust on both sides. During the project, we constantly looked at the optimal composition of the Wageningen team. At one point, we would need a microbiologist while at others we required an expert in genomics or a process engineer. We were able to switch efficiently between applied scientists from Wageningen Food & Biobased Research and fundamental scientists from the Bioprocess Engineering, Microbiology and Systems & Synthetic Biology university groups. Thankfully, we quickly concluded that Monascus ruber was the way to go and eventually succeeded in transforming it into a ‘cell factory’ which works quickly and efficiently in industrial conditions.”

An added bonus is that Monascus ruber is a food-grade fungus used in the production of red rice. Registered as safe, the path to further development is wide open. The lab results will soon be tested on a pilot scale at Total’s facilities in the United States, where Wageningen scientists will provide the necessary knowledge transfer. The years of research and development activities are protected by three granted patents.