Streptococcus suis is a bacterial pathogen which is a major cause of mortality and economic losses in the pig farming industry. Moreover, it is also a zoonotic pathogen causing human infections worldwide. Almost 100% of pig farms worldwide have carrier animals, but the factors leading to invasive disease are not well understood. Genetic variation within S. suis complicate the development of effective control strategies so that to date, no efficacious, cross-protective vaccines exist for S. suis. The overall aim of this research project is to unravel the host-pathogen interactions that take place during the infection process and thereby aid the development of effective vaccines, anti-virulence strategies and diagnostic tools to combat S. suis infections.

Two-component systems (TCS) are widespread signal transduction pathways in bacteria, enabling them to sense changes in the environment and adapt their behavior accordingly. They consist of a membrane-anchored sensor histidine kinase and a response regulator. Upon sensing of a signal, the histidine kinase activates the response regulator, resulting in the transcription of the associated genes. As an example, for pathogenic bacteria such a signal could result from the ingestion of the bacterium by the host organism. Activation of the TCS triggers the bacterium to express virulence genes, which are critical to fight the immune system and survive inside the host. Several TCS have been shown to be involved in the virulence of S. suis, but their exact contribution to infections remains to be investigated.  In this project, the contribution of multiple TCS to the virulence of S. suis will be investigated and the regulated genes will be identified.

Recent progress in the field of CRISPR-research has led to the development of a strategy known as CRISPR-interference (CRISPRi). In CRISPRi, a nuclease-deficient Cas9 (dCas9) is targeted towards specific places in the DNA. Since dCas9 lacks nuclease activity, it remains bound to the DNA and acts as a "roadblock", preventing expression of downstream genes.

A CRISPRi system will be implemented in S. suis and characterized using reporter gene assays. In the next step, this system will be used to generate strains with inducible knock-downs of the investigated two-component systems. The resulting collection of mutant strains will then be characterized in a variety of in vitro models mimicking relevant stages of infection. Blood and cerebrospinal fluid will be used to simulate the conditions that S. suis encounters during sepsis and meningitis, respectively. Moreover, different organoid- and immune cell-based assays will be used to assess the ability of strains bearing CRISPRi-blocked TCS to colonize tissues and to resist immune responses. Finally, RNA-sequencing will be performed on selected CRISPRi mutants to unravel which genes are regulated by the respective TCS and elucidate their role during infection. 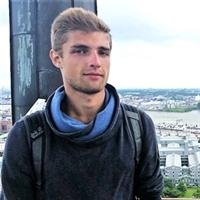