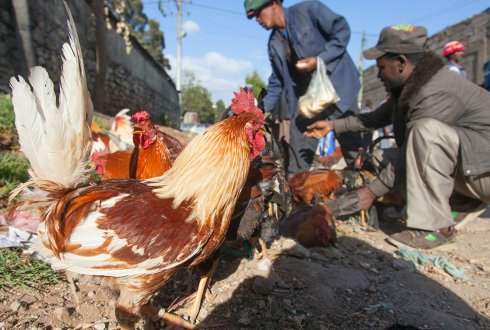 Zoonoses appear to crop up randomly. Some factors that influence their emergences have been identified, e.g. a combined human and animal high population density. Wageningen University & Research researchers are identifying the biological and socio-economic drivers and the main impacts of emerging zoonoses on a local and global scale. The study will result in schematic diagrams for several infections. The outcomes can support policy-makers considering preventive measures against the emergence of zoonoses.

Infections acquired from animals, known as zoonoses, are a major source of human microbiological infection and pose a risk to public health. In the last decades, quite a few zoonoses have emerged with high impact on both a local and a global scale. Emergence of infectious diseases is related to change and adaptation of disease agents and is strongly influenced by changes related to human behaviour, and socio-economical, environmental and ecological circumstances.
We propose an integrated analysis of emerging zoonoses by identifying and qualifying both biological and anthropogenic drivers of emerging zoonoses and assessing the socio-economic impact of such diseases. To address these issues a multi-disciplinary and transboundary approach is needed as has been proposed in the Global One Health white paper.

The goal of this project is to identify the main drivers and the main impacts of emerging zoonoses on both a local and a global scale by a multi-disciplinary and transboundary approach. The project will result in a mechanistic model that will be further developed for a selection of 2 – 4 zoonotic infections. More specifically, the project objectives are: