Anthropogenic nitrogen deposition leads to eutrophication and soil acidification globally, which may change vegetation composition and cause biodiversity loss. This can in turn lead to decreased ecosystem functioning. A possible mitigation measure is the application of rock dust, a slow-release fertilizer that can partially restore lost minerals and enhance soil buffering capacity.

One big uncertainty, however, is how ungulates respond to rock dust and how this in turn influences forest regeneration and development. Past experiments focussing on N, P and/or K fertilization found increased browsing, which may hamper forest regeneration.

This PhD project investigates how rock dust influences bottom-up and top-down processes between plants and herbivores. The main approach is to empirically test how rock dust changes plant chemistry, how this in turn influences herbivore food choice, and how this ultimately affects forest development. The focus is on forests on nutrient-poor sandy soils in the Netherlands, which have been heavily impacted by atmospheric nitrogen deposition.

The main study site is National Park De Hoge Veluwe. Here, multiple rock dust experiments will be initiated, of which the biggest experiment includes newly constructed enclosures and has been set up at 24 stations of the camera trap network, which are part of Snapshot Hoge Veluwe.

The study comprises of four main components. (1) Quantify how application of rock dust influences ungulate habitat use in previously initiated experiments; (2) Quantify intra- and interspecific chemical and growth responses of the eight most common sapling species in the National Park, via a semi-natural experiment with fertilization and simulated herbivory treatments; (3) Quantify how differential responses of the previous experiment influence ungulate food choice in feeding experiments; and (4) Determine the interactive effect between rock dust fertilization and herbivory on forest understory development and forest regeneration in large-scale fertilization experiments.

The outcomes of the study will give insight in short-term higher trophic bidirectional effects of rock dust and the implications for forest restoration, and will help forest managers in their decision making. 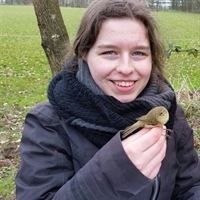