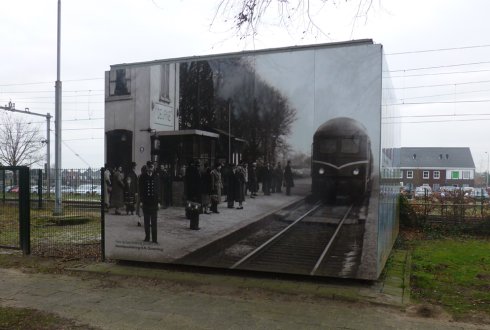 The Deurne Stationspark Cooperation is committed to permanently improving the atmosphere and appearance of the railway station and it’s immediate surroundings. In order to gain a better understanding of the role of the cooperative in the improvement and in the development of ideas and implementation of the activities, the organization asked the Science Shop to conduct research into this.

The type of users highly depends on the size of the station and the facilities present. At larger stations, there is more variation in the type of users. In Coevorden and Deurne there are also companies and retailers in the station area. As more facilities are available, the function of the station area broadens from a transfer area to an area where people stay a longer period of time. This is mainly due to the availability of shops, bars and restaurants.

In Deurne, the station area also has been given a new function by the activities of the Deurne Stationspark Cooperation; different users and stakeholders become interconnected through the activities. In Coevorden there is a potential to develop social activities when both sides of the stations will be connected to each other through an underpass of the railway. However a central party that is in charge of supporting new social initiatives is still lacking. In Coevorden and Deurne, the municipality plays an important role in the design of the area.

In Vierlingsbeek the municipality has a less important role in the development of the area. This is partly due to the small scale of the station and partly to the geographical location at the periphery of a small village. The visions of the national railway companies NS and ProRail become more decisive for the design of the area when a local representative is absent.

In all three cases, the stakeholders involved are motivated to contribute to improvement of the station area. There is an open attitude towards citizens’ initiatives. However the expectations about such initiatives differ. In practice, the possibilities to support initiatives appear to be limited and the initiators are often immediately confronted with the costs and responsibility for the implementation. National railway companies NS and ProRail play an important role in decision-making in all cases. Their preconditions seem very decisive for what is feasible.

Expansion of functions and cooperation

In general stakeholders in a station area are focused on their own objectives. Furthermore, the priority given to the area varies between stakeholders. In many cases there is no shared vision on how the individual objectives can be achieved in mutual cooperation. As shown in the case of Deurne, the strategic importance of the station area increases when new activities are developed and new users are introduced. A larger group of stakeholders becomes interested. In Deurne it is clear that the activities of the cooperative lead to a broadening and connection of functions. The social activities connect stakeholders in a sustainable way, which also creates a shared interest.

The case in Deurne shows that support for the citizens’ initiative is not self-evident and requires a constant effort from both the citizens and other stakeholders involved. NS and ProRail show a growing interest to focus policies on the wider station area and connect with local initiatives. However, at the executive level the fulfilment of the tasks remains the highest priority. The current tender procedures for regional transport pay little attention to the stations as part of the local public transport. A better connection of the small stations to local public transport could not only increase the functionality as a public transport hub, but also the connection of stations with their environment. Current procedures are mainly focused on logistics, technology and safety. This requires a culture change among railway companies and managers of station areas. Municipalities and provinces do also have the opportunity to create preconditions for making citizens’ initiatives possible.

As an active user of public transport, Michel Lintermans observed that the railway station in Deurne and the surrounding area have a desolate atmosphere and appearance. With enthusiasm Michel starts his search for supporters to make a meaningful and sustainable improvement to the surroundings of the railway station in Deurne. However, Michel wants to look beyond Deurne. His dream is to launch a nationwide movement that will support local initiatives to improve small stations. Acorp is an existing comparable organization in the United Kingdom that implemented the community rail principle. The aim of this research is to make recommendations to Michel Lintermans, the Deurne Stationspark Cooperation and other organizations involved in strengthening, supporting and starting up citizens’ initiatives for improvement of station areas of small stations.

More about the project: