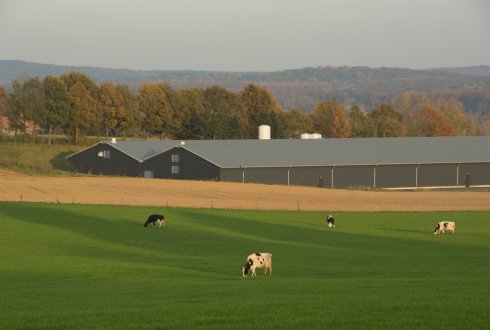 Human health can be affected by endotoxins, dead bacteria particles that can trigger the immune system. These endotoxins are present in farm animal faeces, excreta and manure. Wageningen University & Research scientists study the effects of endotoxins on animal health and the options to reduce endotoxin production, concentration and emission in animal production systems. They consider the interactions of the microbiome and feed that influence manure and excreta quality, and technical designs to reduce airborne endotoxins. Promising interventions are evaluated on socio-economic feasibility and consumer acceptance.

A citation of the position paper ‘Global One Health - a new integrated approach’: "Until recently, disease prevention and control were usually organized from a single disease perspective. In many countries, these measures led to significant improvements in health, but were followed by the emergence of non-communicable diseases, requiring a new approach to public health " This multidisciplinary research proposal on airborne endotoxin emission from animal production systems focuses on human health as well as animal health by reducing the airborn endotoxins through a source approach.

Human health is affected by particulate matter (PM) and particle-born endotoxins (PE) from animal husbandry. These components originate from faeces (often mixed with litter) and animal debris (such as: feathers, hair, skin flakes). Upon inhalation, they can cause lung disease, such as pneumonia, exacerbation of asthma and COPD, and increased lung function decline. Farms are sources that emit PM and PE into the ambient air.

Besides that endotoxins are generated in the human gut itself, causing local and/or systemic inflammatory responses leading to many diseases, like inflammatory bowel disease, liver disorders, cardiovascular diseases, inflammation and metabolic disorders such as obesity, diabetes and neurodegenerative diseases, there are indications about the effects of endotoxin and particulate matter on animal health, but evidence is scarce.

The key objective is to develop a mix of measures to reduce the production of particle-born endotoxins, following complementing paths: addressing root causes: endotoxin sources, influencing manure quality and reducing endotoxin production and manure quality by changing feed composition; and developing measures and interventions to reduce endotoxin concentration and emission in primary animal production environments including the implementation and acceptance of both social and consumers implementation.In this project, a consortium is formed that sees the importance of these endotoxins as risk factors for both human and animal health and recognizes the need to reduce these at source using an integrated multidisciplinary strategy.  During the first year the focus will mainly be on four work packages. The work carried out within these work packages is:

A Global One Health

Read more about A Global One Health; one of the strategic themes of Wageningen University & Research.