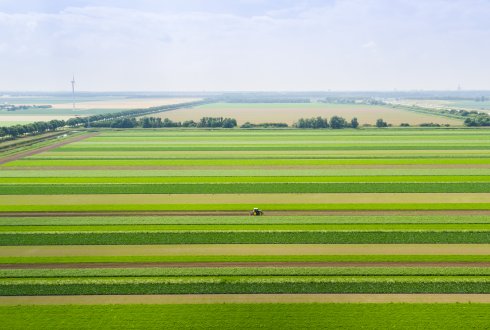 Aiming for a robust production system

The objective of the project is the testing and (ongoing) development of a robust plant-based production system. The project is an implementation of a long-term system experiment on resilient production systems, which aims to quantify the agro-ecosystem services provided by increased crop diversity at the field level. Working within the parameters of current cultivation systems, we are introducing diversity in the form of time, space, genes and interactions with legumes.

Approach of the experiment

This long-term system experiment is examining the effects of three dimensions of crop diversification (time, space and genes) on the provision of agro-ecosystem services. We're also investigating the interactions between those three dimensions of crop diversity. The experimental design is informed by agronomic norms of the past, viable options for innovation within current cropping systems and future agronomic frontiers. . The tested rotation is based on the crops most commonly grown by arable farmers in the Netherlands, and on local practice. The rotation consists of: grass clover – cabbage – onion – potato – wheat and carrots. The experiment examines 3 crop pairs: cabbage – wheat, carrot – onion, and potato – grass clover.

We are researching the following treatments:

The crops and crop combinations are similar at each experimental site, though the actual combination of crop and strip width differs depending on the soil type and existing conditions at the site. In Almere, for example, spinach is being cultivated and no wheat or onion, and experiments with different strip widths are done on practical scale with strip widths of 6, 12 and 24 metres.

At the Wageningen experimental site leeks are being cultivated instead of onion, and a future question: how much potential and impact could there be in ‘pixel’ cropping? (50x50 cm pixels filled with random crops completely mixed and cultivated alongside each other) is being explored.

The experimental site in Lelystad has been connected to the experiments in Wageningen and Almere through the smart use of incomplete block design.

The project’s core activities are:

The framework of this long-term cropping experiment was determined in accordance with a wide group of scientists and farmers. The trial is statistically solid enough to come with reliable and substantiated conclusions about the effects of the various measures.

Proposed outcomes of the project