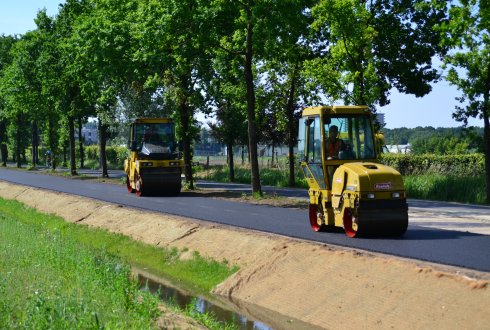 Wageningen Food & Biobased Research is making progress with the development of bio-asphalt. Half of the fossil-based bitumen has been replaced by the natural binder lignin in a number of demonstration projects. The quality of the bio-asphalt compares well with conventional asphalt, which is good news for an international asphalt industry actively seeking bio-based alternatives.

The first trial of bio-asphalt was laid out on a 100-metre-long test section in the Dutch province of Zeeland in July 2015. Wageningen Food & Biobased Research collaborated with the Asphalt Knowledge Centre, Zeeland Seaports, Cargill and asphalt producer H4A to enable this project. The road is located on an industrial site and is used intensively by trucks and passenger cars daily. At the time of writing in 2018 the performance remains good and there is no damage.

Lignin, a natural resource released during the production of pulp in the paper industry, is an extensive waste stream which is mainly used for energy production. Following this project, two asphalt strips of 400 metres were realised with the same partners elsewhere in Zeeland. These sites use a cheaper type of lignin that is released during the pulp production.

The world's first bio-asphalt cycle path was built on the campus of Wageningen University & Research in June 2017, sponsored by the municipality of Wageningen, Wageningen University & Research, the Asphalt Knowledge Centre (AKC), project developer Roelofs and the province of Gelderland. The scientists selected three suitable types from a selection of eight types of lignin and laid them out in separate sections. Two of the types come from the paper industry while the third consists of lignin released during the hydrolysis of straw and the production of cellulosic ethanol. This latter type of lignin has a lower degree of purification, which makes it cheaper to produce. This is an important criterion for making bio-asphalt economically viable.

Huge interest in lignin for bio-asphalt

“There is enormous interest worldwide in lignin as a sustainable source for bio-asphalt,” says lignin expert Richard Gosselink of Wageningen Food & Biobased Research. “The industry is aiming to get rid of bitumen from petroleum over time and bio-asphalt is already mentioned as a requirement in some tenders. Lignin is interesting because, like bitumen, it gives structure and support to asphalt. In addition, it is abundantly available in nature. Another advantage is that the lignin-based bio-asphalt can be produced at much lower temperatures. Last but not least, by using lignin we can save considerably on the use of fossil-based material.”

While between 60 and 70 tonnes of lignin has already been processed in asphalt to date in the Netherlands, the supply still lags behind demand. “At the moment, lignin is more expensive than bitumen,” Gosselink explains. “However, the expectation is that the price of bitumen will increase considerably in the future, while the quality will decrease. Follow-up research is primarily focused on finding cost-efficient lignin sources. If we succeed, lignin can be produced on a much larger scale and bio-asphalt will not only be the most sustainable, but also the most economically attractive alternative. The ultimate goal is to develop bitumen-free asphalt that consists entirely of bio-based components.”

Gosselink expects a breakthrough within five to ten years. “Then we will have certainty about the performance of bio-asphalt and lignin will be produced on a larger scale. The time-to-market is short: in Zeeland we only needed one and a half years for the total development from idea to realisation.”