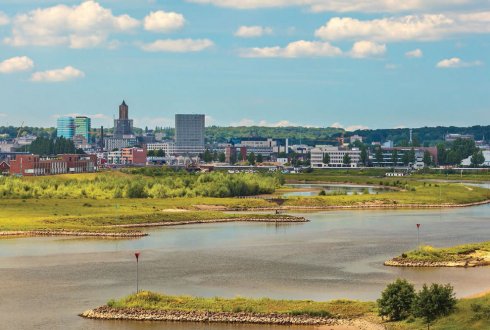 According to predictions based on new climate scenarios from the association of insurers (April 2015), the damage caused by extreme precipitation could increase from €90 million per year to €130 million per year. This illustrates the economic importance of climate adaptation: adapting to climate change and weather extremes, in addition to prioritising water and environmental policy. Climate change will increase the likelihood of flooding and result in more periods of drought, water quality problems and heat stress in urban areas. The problems caused by climate change do not happen overnight. Climate change is a gradual process, but we are sometimes confronted with its consequences, such as the peak precipitation of 120 mm from a single rainstorm in July 2014 in Arnhem. This reflects the urgent need to prioritise climate change policy. In spatial planning, it is crucial to take account of the effects of climate change in a timely and proactive way. Linking development (including infrastructure development) to climate adaptation creates an opportunity for designing sustainable, ‘future-proof’ cities. Various projects have demonstrated that this approach is both effective and affordable. We should therefore take advantage of this opportunity. This is why WaterNexT, a framework of cooperation in the Eastern region of the Netherlands (Wageningen Environmental Research, Radboud University, Water Authority Rijn en IJssel) has mapped out the 'hotspots' in hydrological management area of the Water Authority in which climate adaptation can now be linked to spatial development .

The 'Climate-active City' proposed by the Union of Water Authorities has provided a water authorities with a philosophy for dealing effectively with climate change in urban areas. The Climate-active City can be seen as a movement which aims to contribute actively to a liveable city in which smart policy decisions are made about water, spatial planning and climate. This means not only that the effects of climate change must be anticipated, but also that active contributions must be made to saving water and other resources, for example in the wastewater chain. As one of the leaders in this new approach, Water Authority Rijn en IJssel has decided to take an active role in the Climate-active City and has made this theme one of the priority areas in its innovation programme.