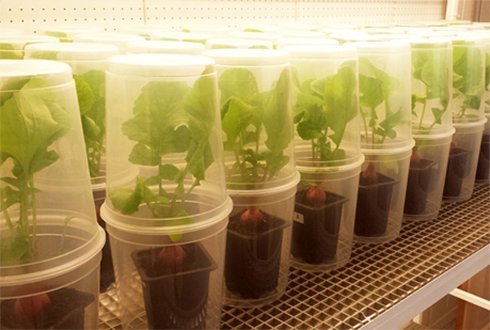 Insecticidal fungi, also known as entomopathogenic fungi, are rarely used against pest insects in the soil currently. There are two main reasons for this: it is difficult to get the fungi into the soil, and the fungi don’t survive in the longer term without pest insects.

Some fungi have developed a way to survive without pest insects. They remain on/in or close to the roots of the plants on which the pest insects feed. This protects them against other organisms and allows them to feed on substances from the plant.

Scientists at Wageningen University & Research isolated the fungi from the roots and tested their effectiveness against grubs and crane fly larvae. Scientists from the Zürcher Hochschule für Angewandte Wissenschaft (ZHAW) identified the fungi to the species level.

Root-colonizing capacity and effectiveness against other soil pests

The success of the five isolates brings us to the next steps: testing these fungi isolates on root-colonizing capacity and efficacy against other soil pests. The most effective ones are currently being tested against the cabbage fly.

Eventually the research should lead to a workable product with fungi that survive well in the root environment of the plant. This has yet to be achieved. It is still unknown what will happen to the plant if the fungi reside there: will the growth of the plant be impeded because the fungi consume a considerable amount of the plant’s energy?

Another question involves the extent to which fungi protect the plant if they are on the inside instead of the outside. And then there is the issue of how the fungus can be processed into a suitable product for applications in practice. One option is seed coating - giving the fungus along with the young plants.

In biological control, natural enemies of bacteria, fungi and insects are used to control pest populations.