An invasive species of seagrass is rapidly expanding in the Caribbean. This species is suppressing native seagrasses, reducing coastal protection and decreasing biodiversity. It would be good if the ecosystem itself could offer resistance to this exotic species. For example, through native herbivores, with a taste for the species which could prevent proliferation.

In a new study researchers from Wageningen University & Research, together with colleagues from Amsterdam and Miami, have discovered that fish can take on this role.

PhD candidate Fee Smulders and Dr. Marjolijn Christianen saw that, in Lac Bay on Bonaire, hardly any invasive seagrass grew in places with plentiful fish. In several pilot experiments, it even disappeared entirely at times. The researchers suspected that fish were playing a role in this. In order to test this, they set up an underwater experiment that included cage treatments, which excluded most of the fish. This allowed them to measure the effect of the fish on the invasive seagrass.

Lac Bay is part of a marine protected area. To complete the comparison, MSc student Tatiana Becker conducted the same experiments on Aruba. But in an unprotected seagrass ecosystem with fewer grazing fish, and lower species diversity.

“Our results show that grazing fish can reduce the expansion rates of invasive seagrass by half,” says Fee Smulders. “This effect is reinforced by local nutrient enrichment, because fish love to eat leaves rich in nutrients. Native seagrass species are better adapted to high grazing pressure, while invasive seagrass disappears under high pressure. But this mechanism only applies in the protected ecosystem of Bonaire, where fish densities are quite high. On Aruba, we saw no difference after nutrient addition. Invasive seagrass also grew much faster there, probably due to low fish densities. So a protected area with lots of native grazers can be more resistant to invasive species.”

Marjolijn Christianen: “In the past it was thought that herbivores hardly play a role in seagrass dynamics. Now we know better, and show that they are indispensable and can shape the underwater landscape. Our results add to the growing evidence that protection of marine areas is effective, and urgently needed.” 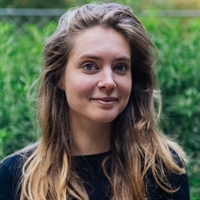