An international large-scale survey will start at the end of June to the numbers and distribution of harbour porpoises, dolphins and whales in the European North Sea and adjacent Atlantic waters. This survey called SCANS-IV is the fourth in a series that began in 1994 and was repeated in 2005 and 2016. For the central North Sea, from the Netherlands to the Shetland Islands, researchers from Wageningen Marine Research and Bureau Waardenburg will conduct the survey in the coming weeks.

The results of SCANS-IV will be used to optimize management for cetacean conservation. These animals can be strongly influenced by human activities at sea, causing for instance underwater noise, bycatch or pollution. The previous SCANS surveys showed that roughly one and a half million cetaceans live in the surveyed area.

From Norway to southern Spain

The study area extends from Norway to southern Spain, extending to the offshore waters west of Scotland. The work will be carried out with eight airplanes, all manned by a team of experienced observers, from the end of June to the end of July 2022. In addition, far offshore areas will be surveyed from a ship; in 2022 this concerns the Bay of Biscay and in 2023 the areas west of Scotland. For a complete picture, a similar survey takes place in Irish waters, in the ObSERVE program running from 2021-2022.

Counting cetaceans from an airplane

The aerial surveys will be conducted in about forty sub-areas. A team of three observers is present on each airplane. Two of them look out of so-called bubble windows, giving them an unobstructed view of the sea surface below the plane. The third observer enters all the data that the observers relay via the comm-system.

Last May, representatives of the participating countries coordinated the details of the study in a workshop in La Rochelle, France. New software and new equipment were also tested during flight simulations, in order to optimize them. The findings of the workshop were included in the final research protocol. So that on June 27 (weather dependence), all eight planes can take off to conduct the SCANS-IV study. 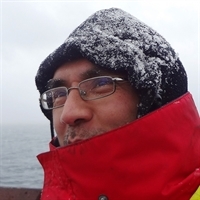 Do you have a question about the international survey of cetacean? Ask one of our experts: ir. SCV (Steve) Geelhoed
Contact form + Show more (1)