Agricultural businesses play an important role in decentralised energy generation. That role could develop further with more effective use of localised energy. “If you’re flexible, you can do all sorts of clever things on your side of the electricity meter,” say WUR researchers Andrea Terbijhe and Andries Visser. “You need to be able to take advantage of the peaks.”

Lots of work is being done at Acrres – WUR’s research arm for renewable energy – on Switch, the new field lab. The WUR Field Crops site will become home to various new test installations, including an electrolyser, which uses electricity to produce hydrogen. Andrea Terbijhe, a researcher working on Smart Grid at Acrres, focuses on the technical and economic viability of these types of developments. “The sun, wind, a battery and an electrolyser are brought together in this test installation which we’re going to research in partnership with TNO, and it will act as a simulator for installations in wind farms at sea,” she says. “This is because bringing electricity onto the mainland incurs large losses due to the long distances involved. Hydrogen production might be an alternative.” The arrival of the test installation in Lelystad will also provide an opportunity to identify the role that hydrogen can play in the energy mix in rural areas.

Andries Visser, a researcher in rural-urban relations, often works on energy issues in the agricultural sector. He currently works as the coordinator for the PPP on Agriculture & Energy, a large public-private project designed to kickstart the energy transition in agriculture. One of the regional pilots in this project involved a group of 20 arable farmers in the south-west of the Netherlands, investigating how they can generate more renewable energy without over-burdening the electricity grid. This is because the amount the farmers are aiming for collectively far exceeds demand. “We’re working out what can and can’t be done, and are working with businesses to find creative solutions which would enable them to use more of the energy generated at peak times on the spot, thereby reducing the amount that has to be directed to the grid.”

According to Visser, local initiatives delivered through carefully considered planning processes can generate more support for renewable energy. Following the growing resistance to building wind turbines on land, the same seems to be happening with large-scale solar parks, for example. This creates a dilemma for farmers too. “There are two sides to it,” says Terbijhe. “Financially, constructing a solar park is quite an attractive proposition for farmers at the moment. It gives you long-term assurance of a good return. But is it actually what you want?” Visser adds: “If it means taking good agricultural land out of production, lots of people will have a problem with that, including farmers themselves. There are some initiatives looking at whether mobile solar parks could be included in rotating crop plans. That’s an interesting idea. But an easier win would be to first use up the available capacity on rooftops. If you assume an average of 500 square metres of roof at each business, you could generate 5.6 TWh of energy just from rooftops.”

The group of 20 arable farmers Visser is working with would also love to cover their roofs with solar panels. But their problem is a mismatch of demand and supply. “Solar panels generate the most energy in the spring and summer, and that happens to be when arable farmers don’t need to use as much energy. For most growers, energy demand peaks at the end of the summer. That’s when the harvest takes place and crops are brought in. Then lots of ventilation and refrigeration is needed, which requires a large amount of energy.” The amount of energy generated is such that temporary storage in batteries isn’t a viable solution. Not for now, at least, given where we are with battery technology.

An alternative solution would be to try and better align supply and demand. “You can find other destinations for the energy, such as local households, or you could bring downstream processes closer to the farm. These could include concentrating milk, or partially processing potatoes and vegetables. That would save on transport movements too.”

Temporary adjustments to energy demand can also help. For example, certain processes such as chilling in a storage facility can be delayed by smart computer programs until such time as there’s an over-supply of electricity. “Right now you sometimes have the odd situation where electricity is free or even generates revenue, at times when supply is much greater than demand,” says Terbijhe. “This calls for a different way of thinking. I sometimes compare it to how we used to use the phone in my student house. There was a metre and you paid for the units you used. Now you can use the phone as much as you want, because telephony barely costs anything now. It’s not quite the same as electricity of course, but it’s no longer about the price per kilowatt hour. It’s about all the other factors and how flexible you are.”

Hydrogen production is another way of storing a temporary surplus of electricity. The next few years will reveal whether there’s a place in the mix for this form of energy storage. “Hydrogen can be used as a substitute for diesel in heavier tractors and machinery,” says Visser. “You could also mix it into the mains gas grid. We want to research this as a possible solution at the farm level, and see how it can be used to create a link with the local area. Groups of farmers could share the use of an electrolyser, for example.”

Less efficient doesn’t necessarily mean less sustainable. Shutting down a wind turbine when there’s a surplus of electricity isn’t sustainable either. That’s why adding hydrogen to the energy mix may well be a good solution. Photo: Ruud Ploeg

The counter-argument is that hydrogen production itself uses a lot of energy and is therefore unsustainable, but Terbijhe is unconvinced. “Less efficient doesn’t necessarily mean less sustainable. Shutting down a wind turbine when there’s a surplus of electricity isn’t sustainable either. That’s why adding hydrogen to the energy mix may well be a good solution. Hydrogen also doesn’t necessarily need to be highly pressurised, which is an energy-intensive process. It’s only useful to do that if you want to trade it as transport fuel, because you can then pack lots of energy into a small volume. But if you can use it in another way, you can skip that step.” Nevertheless, Terbijhe still feels there are lots of questions around hydrogen use, both technical and economic. “We’re pleased that we’ll be able to start testing the technology on a practical scale. There’s going to be a hydrogen-fuelled fork-lift truck here at the trial farm too. That will show us exactly what issues farmers might come up against when using it in practice.”

Sustainable energy is also relevant to the research being carried out at the Farm of the Future into sustainable business systems. “We’re researching how a fossil-free system might work,” says Visser. “This would include avoiding artificial fertilisers as much as possible, and powering small autonomous machines that minimise soil compaction and are also less energy intensive.” Electrically powered equipment is already common in stables and barns but is now also becoming more viable in the field. According to the researchers, the electrification of farms will steadily increase over the coming years. “That’s clearly the direction that mechanisation is going in. Tractors, machines and irrigation systems still mostly run on fossil fuels now, but they could easily switch to electricity and hydrogen. And even when a tractor is stationary, its battery could be used as a temporary buffer.”

One important reason for considering the use of hydrogen in agricultural businesses is that it has the potential to replace diesel. Many light processes can be performed with electrical power, fed by batteries. That’s already happening. But for heavier work such as ploughing and harvesting, an electrically powered tractor or machine still isn’t viable because of insufficient battery capacity. Hydrogen could be the solution, particularly as the energy vector then simultaneously addresses the problem of the imbalance in electricity production and consumption. “Say you have a farm with a 55 kW electrolyser,” says Visser. “That 55 kW is equivalent to what you can supply to or draw from the grid. With an additional destination for the energy on your farm, you can place twice as many solar panels on your roof, using the same connection, and produce enough hydrogen to replace diesel at two farms. Meanwhile, you can use the residual heat from hydrogen production in any domestic premises or staff canteen on the site.” 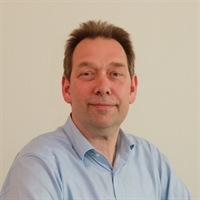 Do you have a question about energy in agriculture? Ask our experts: dr. AJ (Andries) Visser
Contact form + Show more (1)