Driving, cycling, cooking and even heating, electricity is used for an increasing number of purposes. Scientists are now investigating whether electricity can also help replace petrochemicals. Can electricity in combination with bioresources substitute the petrochemical industry in the future?

Almost all chemicals and the materials made thereof that we use in our daily lives are made from petroleum. This includes plastics, laundry detergent, medicines and many items of clothing. But, as a resource, petroleum, is not environmentally friendly (see the box on fossil resources and fuels). Moreover, the use of these commodities for future generations is limited, and the oil supply is running out.

Scientists have been searching for ways to produce everyday materials from plants or plant residues, otherwise known as biomass or bioresources, for many years. Significant steps have been taken in recent years. Corn stems and sugarcane are already used industrially for the production of plastics.

A system that relies on natural, renewable resources to produce materials and chemicals is also known as a circular economy. Working with bioresources has its advantages, says Harry Bitter, professor of Biobased Chemistry and Technology. Materials such as waste wood and the material lignin are made up of large, complex molecules, ideal for producing complex materials. ‘Thus, there is no need to start with the smallest of building blocks’, says Bitter.

Fossil resources such as petroleum, natural gas, coal and lignite were deposited in the soil millions of years ago by plants. Even then, plants grew through photosynthesis. They extract carbon dioxide (CO2) from the air and break it down into carbon (C) and oxygen (O2). The oxygen is released into the air, while the plant embeds carbon in its leaves, stems and roots. Plants and their carbon that died millions of years ago ended up beneath layers of soil. This long period below ground caused the material to fossilise and thus become a fossil resource.

Although fossil resources are plant-based, they are not sustainable. They contain large amounts of carbon and, as we are now extracting these fossil resources from their deposits at a rapid rate, their carbon, together with oxygen, forms carbon dioxide in the atmosphere. 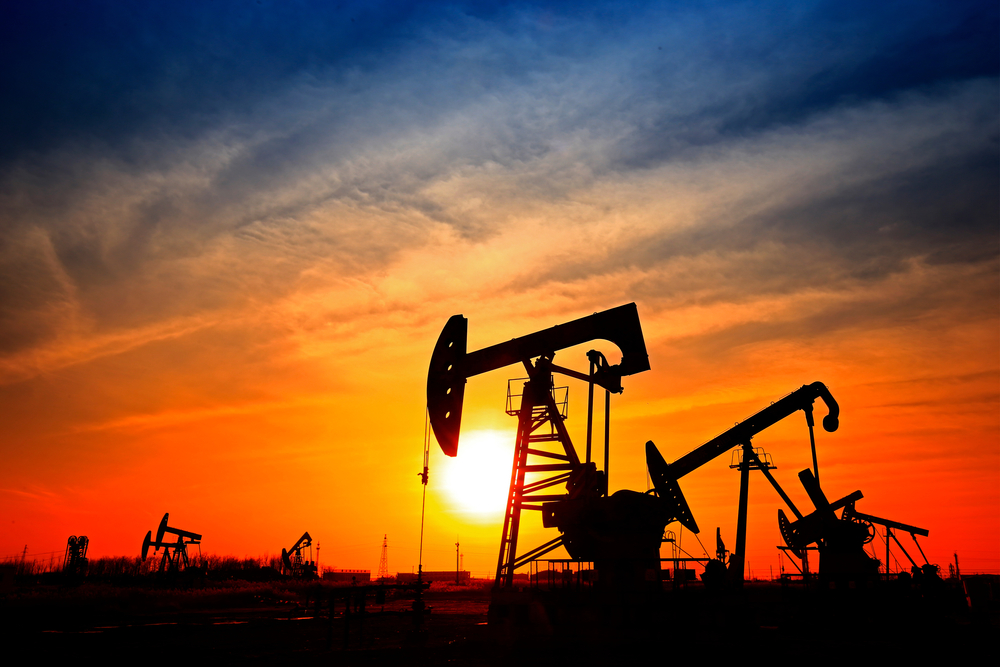 Previously, oil was mined in the Netherlands using large pumps, the so-called horsehead pumps. These are no longer in use in our country. In Germany, however, horsehead pumps are still used.

Electricity as a heat substitute

‘Whether it’s oil, a molecular substance or the ingredients of a cake, energy is always required to transform one substance into another’, Bitter explains. Turning ingredients such as butter, sugar and flour into a delicious cake requires manpower and heat. Heat is also used in the petrochemical industry, in which petroleum is transformed into useful products. However, the ovens used in this industry do not heat up to the 160 degrees required to bake a cake, but up to temperatures of hundreds of degrees Celcius.

To reach these temperatures, the petrochemical industry burns fossil fuels such as natural gas. This releases carbon dioxide into the atmosphere. Wageningen scientists are working on an environmentally friendly alternative that does not require natural gas and does not emit carbon dioxide. ‘We replace heat with another energy form: electricity’,  says Jacco van Haveren, programme manager Biobased Chemicals and Fuels. This process, through which materials and chemicals are produced using electricity, is known as electrosynthesis.

Substance A reacts to substance B under high temperatures. ‘Simply put, this is because molecules in a substance move faster under pressure or an increase in temperature’,  Bitter explains. ‘These movements cause molecules to collide and thus form new substances.’ However, such movements are uncontrolled, as if you were to toss a handful of marbles into a cardboard box. 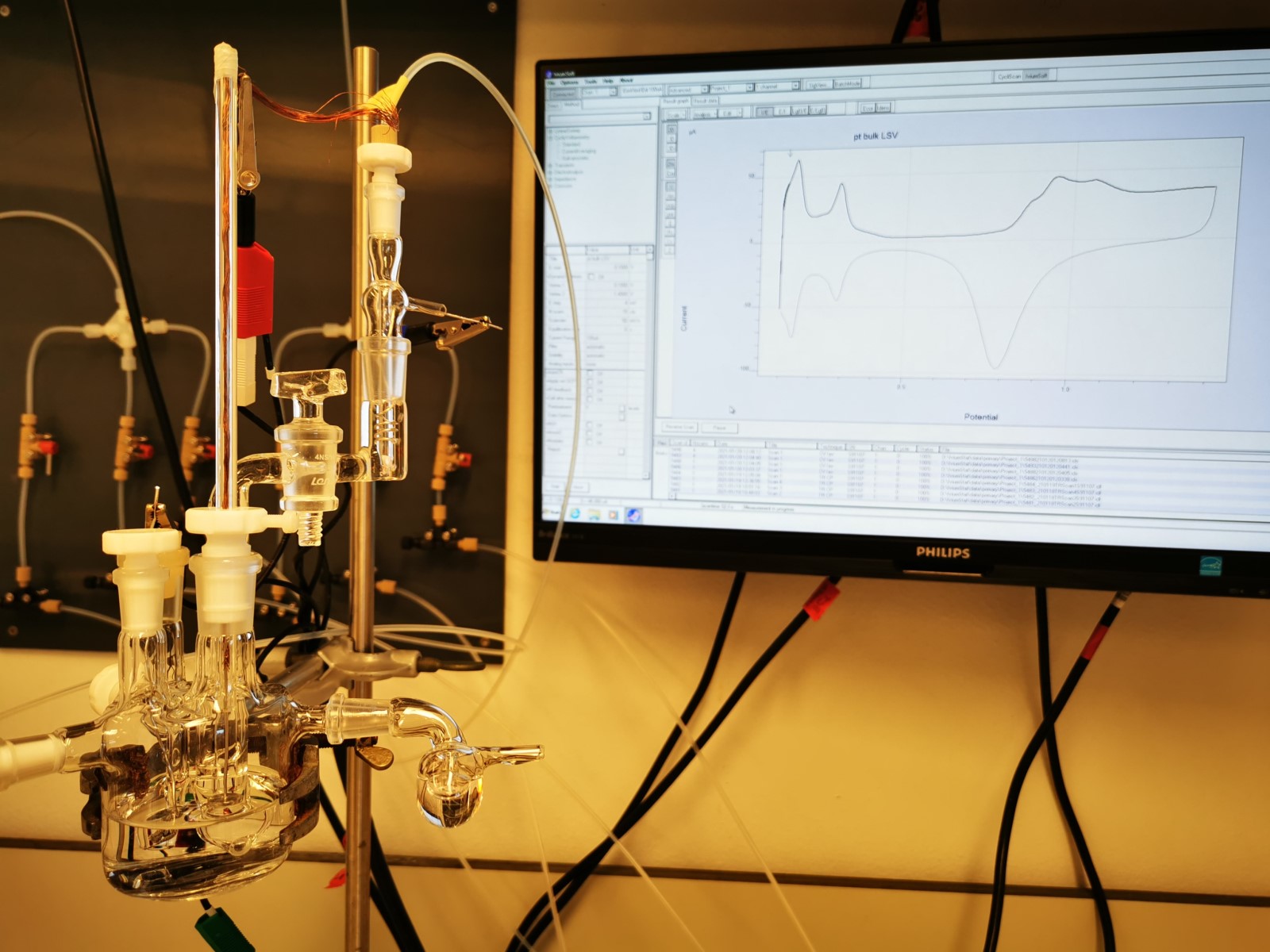 There are large barrels in Bitter and Van Haveren’s labs with two rods, the so-called electrodes. There is an electric charge between the electrodes, similar to that in a battery. In the drums, the scientists transform bio-resources into useful materials by running a current through them.

Bitter expects these movements, and the ensuing reactions, to be much more targeted with electricity. Electrical current provides each of the particles with a small charge by removing or adding an electron. The molecules are thus transformed into tiny ‘’magnets’’  that attract each other. This forces a targeted reaction, even under low-temperature conditions. This is comparable to magnetic marbles lying still in a box, slowly moving toward one another.

Two groups in Wageningen collaborate on electrosynthesis with bio-resources, each from their unique expertise. The Biobased Chemistry and Technology Group, under Bitter, focuses on the fundamental aspects of electrosynthesis. ‘We strive to understand what happens when electricity is applied to substances, and what new materials are formed’,  says Bitter. Van Haveren and his colleagues at Wageningen Food & Biobased Research (WFBR) form the linking pin with the industry. ‘We study what products might interest the industry, and how processes may be improved and implemented’,  Van Haveren states.

The two groups focus on, among other things, typical by-products such as levulinic acid, a residue formed during the processing of sugar. This substance in itself is a resource for, for example, solvents. However, with a few alterations, it could also serve as an ingredient for coatings and adhesives. Scientists study how they may transform this substance in collaboration with Utrecht University and TU Eindhoven.

‘Put simply, we transform substance A into substance B’, Bitter explains. But, substance B must have a useful purpose. Therefore, the researchers modify the levulinic acid bit by bit, checking the end product after it has been subjected to an electrical current. 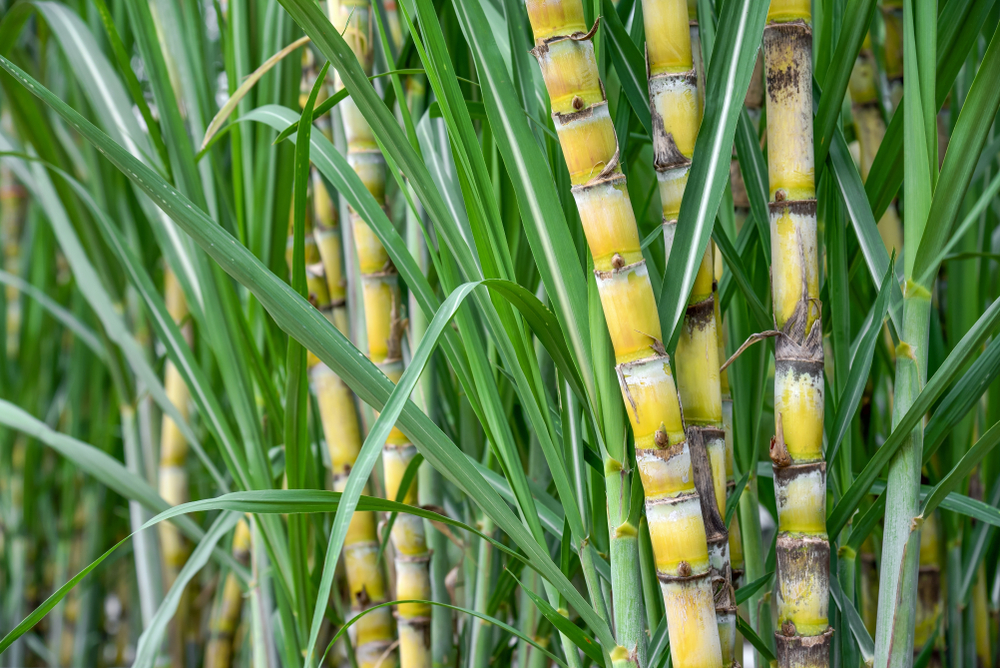 Levulinic acid is a by-product of the sugar industry. Scientists aim to transform this substance into useful building blocks for medicine, food additives, or paint through electrosynthesis.

These modifications are not randomly applied. Based on previous studies and the structural formula of the substances, scientists estimate the effect certain adjustments may have. But, it is still trial and error to a certain degree, Bitter admits. ‘Sometimes, we add an extra tail to a substance to see what substance may form as a result of the electrosynthesis.’

The preliminary results of the experiments with levulinic acid are hopeful. ‘We have successfully transformed levulinic acid into the useful valeric acid’,  Van Haveren states. But, the researchers are not yet at the finish line. Currently, electrosynthesis only transforms a portion of the levulinic acid molecules into useful components. The remainder forms other substances for which the researchers are still searching applications. Therefore, scientists seek ways to make the reactions more targeted and thus increase the amount of useful product. ‘We are currently studying the amount of current we allow to pass through the barrel, and what electrodes and catalysts are the best’, says Van Haveren.

Electrosynthesis does not just work on levulinic acid. So far, Wageningen Scientists have managed to make approximately twenty products using this electric method. ‘This may not seem much’, Van Haveren says, ‘But we have only been at it for two years with a handful of researchers’. He expects to double the number of products made from bio-resources in two years.

The pros and cons of electrosyntesis

The fact that electrosynthesis with bio-feedstock provides an environmentally friendly alternative to oil refinery is one of the reasons Van Haveren focuses on this method. The fact that this method does not require high temperatures is also an advantage, says Van Haveren. ‘If you need high temperatures and pressure for your chemical reactions, you need all sorts of expensive materials and provisions to prevent explosions’, he explains. Since electrosynthesis is carried out under less extreme circumstances, it is safer and does not require expensive safety equipment.

Moreover, a reaction with electricity is fast, as the molecules react immediately. And the reaction can be paused or stopped through a simple push of a button. Chemical reactions that burn gas, for example, must be extinguished to stop the reaction. 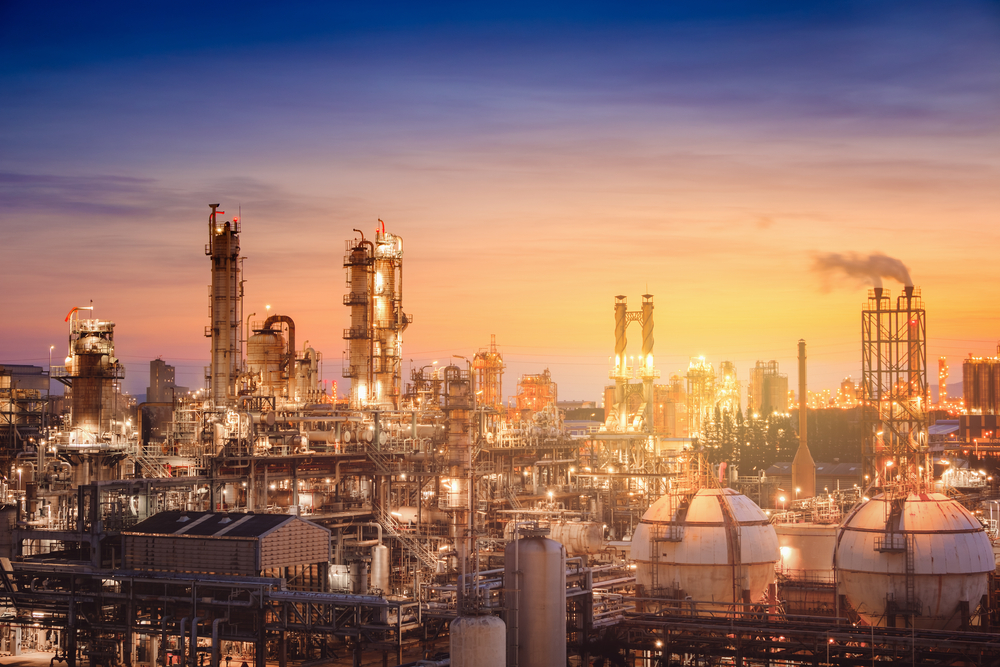 The industry has invested heavily in the existing factories, which cannot be simply converted.

Plenty of examples of electrosynthesis. Within a decade, applications will be possible, Van Haveren thinks. On the other hand, Bitter expects it will take at least another 25 years before the greater part of our clothing, medicines, and other common materials are made from bio-feedstock with electricity. ‘Replacing a large portion of the current petrochemical industry will take quite some time’, Bitter explains. This industry has invested vast amounts of money in the existing factories. Converting these factories is costly, which means electrosynthesis must first become as efficient and cost-effective as oil refinery.

Although windmills and solar panels generate more and more electricity in the past years, it is not enough for large-scale production of materials and chemicals. But, scientists expect this to change, In 2016, for example, the Netherlands generated three times as much renewable energy as in 2004. ‘There will come a time when we generate more electricity than we use’, Van Haveren expects. ‘That would be the moment to switch to electrosynthesis.’

There will probably be enough electricity available in 2045. But, what about the bio-resources, do we have enough of those? Van Haveren thinks so. ‘If we manage the bio-feedstock we have sensibly, we should have sufficient to meet our needs for materials and chemicals.’ The industrial sector could use by-products and waste products from the food industry as well as crops, says Van Haveren. ‘In the Netherlands, part of the agricultural feedstock is already used for non-food purposes, and this share will likely increase’. He warns that problems will arise should we also use bio-feedstock for all our fuels, as this will cause scarcity and increase carbon emissions into the atmosphere. 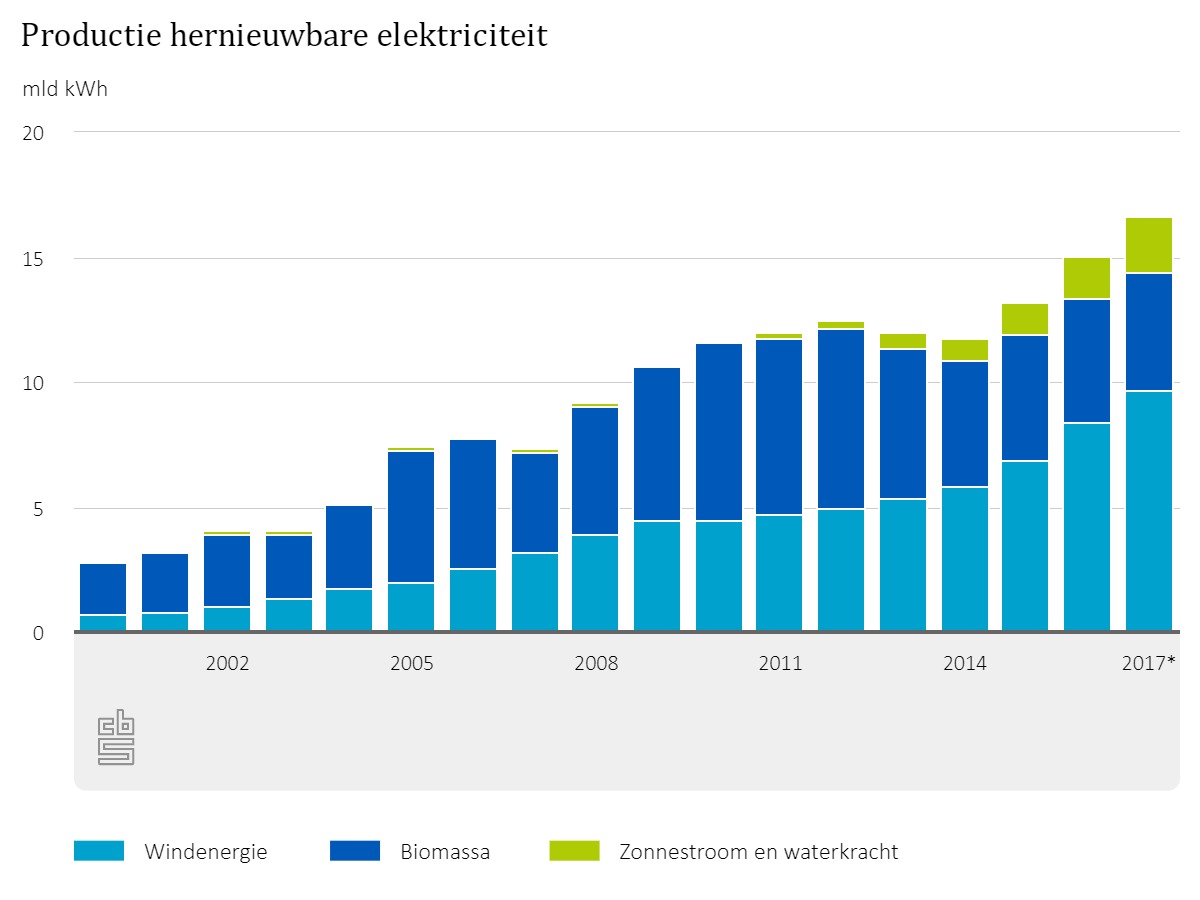 For the time being, the industrial sector will not use electricity to produce materials and chemicals. In the coming two or three decades, we will use electricity to cook, drive, and warm our houses. However, investments in solar panels, windmills and other renewable energy sources increase globally, slowly leading to the energy surplus that the chemical technologists eagerly await. By that time, the scientists may also have figured out how to make high-value, useful materials from different types of bio-feedstock. 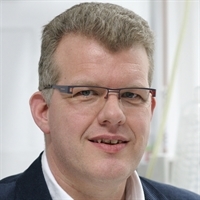