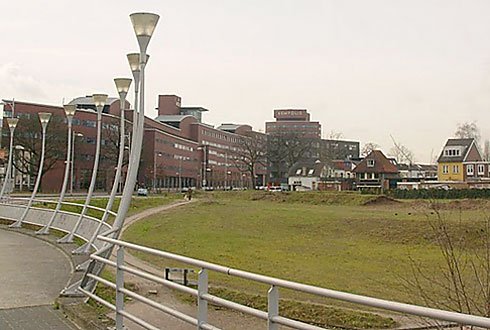 Association ‘Sustainable Soesterkwartier’ in the city of Amersfoort is convinced that establishing a green recreational belt between the city centre and the rural area can be a solution to the social and urban planning challenges that Amersfoort is facing today. Sustainable Soesterkwartier calls this green recreational belt The Green Rail Track (Het Groene Spoor). In this report, this hypothesis is tested by matching the social and urban challenges with a design for the Green Rail Track at study area level and plot level. Guiding concepts in the study are Reuse Of Space, Temporary Planning and Multiple Land Use.

Amersfoort has a number of social issues similar to those of other cities, such as lack of green and recreational corridors between the city and the rural area, insufficient outdoor playing areas for children, the urban heat island and a fragile water system. At the same time, the municipality of Amersfoort wants to build a considerable number of residential and office buildings near the railway station, which means that degradation of the current spatial quality must be avoided.

These urban and social issues can be addressed by developing a green railway zone. Paradoxically, the green rail track should, on the one hand, be a unit in form and function (a connection between town and countryside), and should, on the other hand, get a very local interpretation that meets the local needs and possibilities.

Our study shows that it is not possible for the ecological and recreational corridors to completely overlap. Where they do, they reinforce each other. Where this is not possible (sometimes the ecological corridor runs across land where nobody is allowed to come, and sometimes the recreational corridor runs through build areas, past historic buildings, where nature is not very much present), they each have their own place. These connections support the unity and the identity of the area. Another way to create unity in the area is the application of a connecting element. For the railway zone, the butterfly-bush is well suitable because it fits the dry sandy soil, the flowering is long lasting and is a recognizable element.

Using the aforementioned theoretical concepts, these findings at study area level are translated to plot level. The proposal is to provide a lay-out that fits the local needs and possibilities and, at the same time, contributes to the necessary unity of the green rail track. The many undeveloped parcels in the area, therefore have (temporary) designations like urban agriculture, nature, culture, playground, recreational or ecological connection. That these functions primarily were approached as 'temporary' has to do with the much more limited legal procedures in contrast to procedures for permanent functions.

The underlying idea is that the functions will be able to settle into the collective mind of many Amersfoort inhabitants, which will probably cause these functions to be sustained when the area gets its final lay-out.

It can be concluded that the non-used parcels can be used to achieve the Green Rail Track, which in its turn, gives an adequate answer to many of the social and urban challenges. Prerequisite for success is that for each of the parcels an 'adopter' will be found who is committed to establishing a temporary function at ‘his’ land.