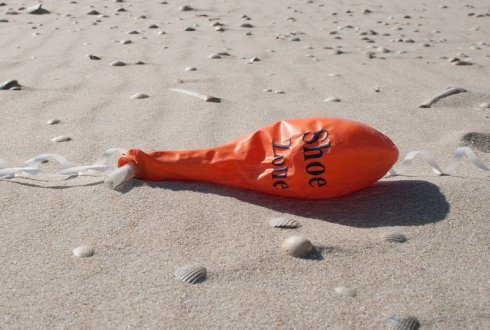 The traditional Dutch Queensday, celebrated annually on 30 April, will be very special in 2013. On that date, Queen Beatrix of the Netherlands will step down from the throne and her son Willem Alexander will be crowned as the new King. Part of the planned festivities in Amsterdam is the mass release of 150,000 balloons. This has raised environmental concern from the viewpoint that balloons are perhaps not just fun items but also litter the environment causing risks to wildlife. Animals can become entangled or mistake the material for food. A worthwhile alternative to consider could be to hang up balloons and collect them at the end of the festivities.

Remains of balloons, ribbons, closure discs and valves are frequently found as litter on our beaches. Following a ‘normal’ annual Queensday, orange balloons have been encountered in distant places abroad. Animals don’t realise the danger from an innocent looking balloon. Birds, fish, marine turtles and other wildlife may become entangled in ribbons or eat balloon parts thereby obstructing the normal passage of food through the stomach and gut. So, the mass release of balloons may not be such a good idea considering what may follow the initial festivities.

Are degradable balloons a good alternative?  Natural latex rubber degrades relatively quickly, but not fast enough to avoid ingestion by marine animals. Synthetic material that breaks down in the natural environment does not really exist. Legal standards relating to terminology like ‘biodegradable’ or ‘compostable’ are based on tests for degradation in industrial composting installations. In the outdoor environment such materials break down extremely slowly if at all. Degradables are thus not the solution.

Previously, following Queensday balloon releases in the Netherlands in 2007, investigators Jan van Franeker and Gilles le Guillou reported on a massive influx of orange balloon debris onto the beaches at the coast of Normandy, France. See:

Of course, the crowning should be a real celebration, including the beautiful sight of lots of balloons. These may be displayed and hung all over town, a joyous sight for everyone. After the celebration, they may be taken down for disposal as proper waste. No littering and no suffering animals …. how simple and beautiful an alternative!