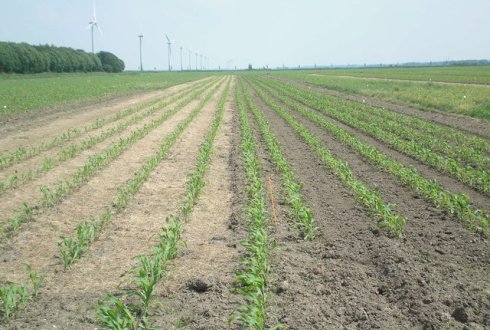 Growing maize without turning over the soil beforehand is good for the environment and may increase yield at the same time. Applied Plant Research is – together with other scientific and commercial organisations - investigating which system is best.

Worldwide a lot of experience has been gained with maize cultivation without turning soil tillage. Biggest advantage is that it makes the soil less sensitive to erosion. But there are more positive points. The costs of such a cultivation system are lower because fewer tillage operations are required. And the water absorption capacity of the soil increases while yields are usually increasing after a number of years.

In the Netherlands very few farmers are growing maize without a preceding turning soil tillage operation. But also here advantages are to be gained. Soil structure of a lot of maize land is poor. No longer ploughing improves soil quality. And also in the Netherlands costs are decreasing, the infiltration capacity of the soil increases, and yields can increase.

Disadvantage is that the transition from ploughing to non-ploughing is difficult. Yields are usually decreasing during the first years. And the new cultivation method needs getting used to. A different tillage system or no tillage at all leads to different weeds, diseases and pests, which are sometimes more difficult to control.

This is why scientists of PPO compare ploughing with various non-turning systems, on clay as well as on sandy soil. The Limburg system involves soil tillage without ploughing. And there is strip cropping where the researchers are using a rotary cultivator to make narrow strips in, e.g., grassland in which maize is sown. There also is a no-tillage variant in which the researchers are sowing maize through the green manure crop.

On clay the scientists are investigating whether permanent ridge cultivation offers advantages in the Netherlands. This method is frequently used in North America where farmers have permanent ridges on their land from which they remove the top layer just before sowing the maize. After sowing they are ridging up again but ploughing and seedbed preparation of the total field are no longer required.

And finally there is dual cropping where the scientists are studying how they can improve yield and possibilities of green manure crops, e.g., by selling the crop as animal feed, as raw material for refining, or for fermentation.

It is important that these experiments are kept for many years because the effects are only showing up in the longer term.