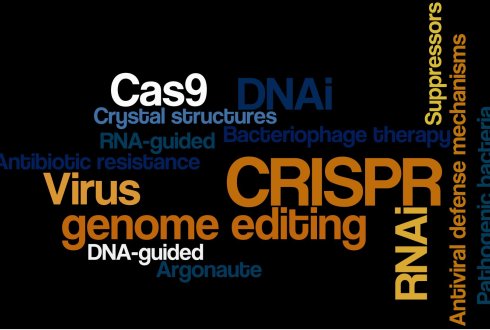 Selfish genetic elements are more than a daily nuisance in the life of prokaryotes. While viruses reprogram and often kill cells in order to multiply, or try to get a ride in the host genome as a stowaway, conjugative plasmids make cells addicted to plasmid-encoded anti-toxin molecules, preventing their disposal. Bacteria and Archaea defend themselves against invasion by these selfish invaders in a variety of ways including a recently discovered adaptive immune system called CRISPR.

The CRISPR system (Clustered Regularly Interspaced Short Palindromic Repeats) is the most recently discovered weapon microbes deploy in the war with viruses. This ingenious immune system operates by integrating short DNA fragments (~30 basepairs) from viruses and plasmids in a specific invader memory locus of the host genome (the CRISPR array). This locus of the “cell’s most wanted” is then transcribed and the transcript is cleaved in each repeat to yield individual mature CRISPR RNAs (crRNA). These guide a dedicated set of CRISPR-associated (Cas) proteins to their targets during cellular surveillance. Once the DNA or in some cases mRNA of remembered invaders is identified, it is permanently damaged by nucleases that neutralize the invader, saving the cell from further harm. Apart from providing protection against DNA viruses, this immune system can prevent the uptake of conjugative plasmids, and invasion by other unwanted selfish DNA elements. Recently crRNA-guided nucleases such as Cas9 have revolutionized genome editing in Eukaryotes.

Our research is centred around the Cascade CRISPR immune complex we discovered in Escherichia coli in 2007. This protein-crRNA complex patrols the cell in search of remembered invader DNA molecules. Once this target DNA is recognized through base pairing of the crRNA, the nuclease Cas3 is recruited to degrade the target DNA, saving the cell from invasion.

Our goal is to understand how various CRISPR immune systems operate. This includes the formation of CRISPR memory, the assembly and function of CRISPR immune complexes, and the mode of DNA interference by CRISPR immune complexes and associated nucleases. Furthermore we are interested in the interaction between bacteriophages and microbes. We apply the acquired knowledge by developing and utilizing CRISPR-based tools, such as Cas9. This RNA-guided nuclease has transformed the way we do genetics in eukaryotes and prokaryotes.

If you are interested in doing an MSc thesis or internship please contact me for more information. 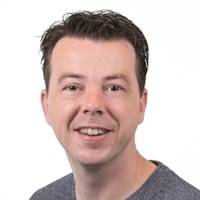