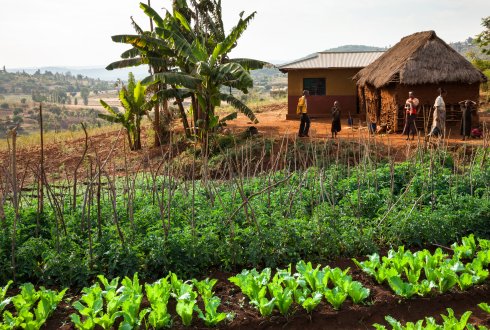 The on-going international debate on the future of agriculture and its ability to meet expected food demands has recently reached the Dutch media thanks to aired declarations by fervent proponents of agricultural intensification. Their argument stems from a simple question that is posed once and again when it comes to debating alternatives to current agriculture: “Can organic agriculture feed the world?”

Not only this question is inappropriate in the sense that it leads to a sterile debate in which parties take to their side even more strongly, but it is also misleading, and fundamentally irrelevant. Let’s turn it around: can conventional agriculture feed the world? This is obviously a rhetorical question. It suffices to look at the latest report on food insecurity published jointly by the UN Food and Agriculture Organisation (FAO), the World Food Programme (WFP) and the International Fund for Agricultural Development (IFAD) (State of Food Insecurity in the World 2012), estimating that nearly 870 million people, or one in eight, were suffering from chronic undernourishment in 2010-2012. The right question to ask ourselves in order to nourish a more fruitful debate is then, why does conventional agriculture fail to feed the world? There are many possible explanations to this but the more fundamental ones are:

If we want agriculture (whether conventional, organic, or something in between) to feed the world we need to work on these four sets of problems. Currently, about half of the food produced worldwide comes from smallholder farms, where yields are very low. Smallholder farmers in developing countries cannot afford the high levels of external input used in conventional agriculture. Of the total energy contained in one grain of maize produced in high input agriculture about 70% comes from fossil fuels. More than 30% of this energy is used in the manufacture of chemical fertilisers.In developed countries, society subsidises conventional agriculture so that farmers are able to purchase such amounts of fertilisers or to fuel their tractors. Then, society pays again for the cost of cleaning the ground water from excess nitrates associated with fertiliser use. The costs in public health caused by the use of pesticides were calculated in a UN report to be around 10 billion euro per year – without considering the costs incurred by biodiversity loss when pesticides are applied (see a recent Europe-wide study, in which Wageningen UR had a central role). Zoonosis and resistance to antibiotics associated with intensive livestock lead also to high societal costs. Every day, three to four farmers go bankrupt in The Netherlands because they are unable to repay the debts they acquired to be able to intensify their production, with severe consequences for society as a whole.

Thus the argument that conventional agriculture produces affordable food might be looked upon quite differently by future generations. If we take a systems perspective and we internalise all the above mentioned costs in the calculation of food prices, the price difference between conventional and organic food will narrow down or just disappear.Wageningen University has a well established reputation on systems analysis, and we have a key role to play in creating awareness on the risk of narrow visions: Inability to think systems wise has led some to conclude that “organic farming is more polluting” based on the fact that emissions are greater per kilogram of produce – disregarding the emissions generated through deforestation in the South, with the production of synthetic inputs or with transport associated with current practices of conventional farming in Europe.

The model of intensification per unit area or per animal, which is deeply rooted in scientists from the green revolution generation is now obsolete. We need to think outside the box. Increasing the already high cereal yields in Europe by one ton per ha would have enormous environmental and economic costs, and will have little impact on reducing world hunger. Increasing current cereal yields by one ton per ha in Africa, for instance, which could be easily achieved through agro-ecological intensification would represent a doubling of the current cereal production in that continent, with less environmental and economic costs than further intensification of European agriculture. And, most importantly, food will be produced where it is mostly needed, and where the surpluses can generate extra income for poor rural households. Yet, meeting future (and current!) food demands implies that both supply and demand need to converge. It will be impossible to feed the world with organic farming – or with conventional farming – without rebalancing the proportion of animal protein in our diets, or without reducing wastes along the food chain.