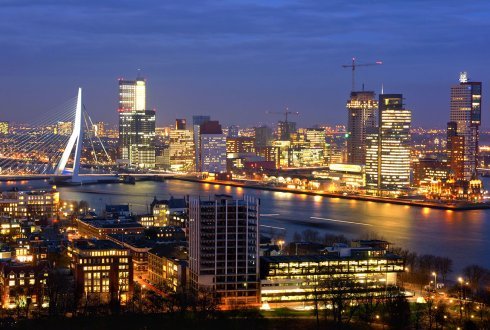 In Europe as a whole, the additional mortality in 2003 was estimated to be 70,000 people (EEA Report No 4/2008 Impacts of Europe's changing climate). The majority of victims were from the cities where the consequences of climate change are particularly apparent. By which measures can the negative consequences of climate change be limited for the urban climate? That question is particularly difficult for the Netherlands to answer. This is because, unlike a large number of other countries, until recently no research has taken place in the Netherlands into the climate in urban areas. Attempts are now being made to make up that lost ground.

The objective of the research Climate in the Urban Environment is to develop model instruments to enable simulation of the urban climate, with which:

In cities, those consequences of climate change are particularly apparent because of the so-called Urban Heat Island effect (UHI): during the nocturnal hours there is an average higher temperature in an urban area than in the surrounding area. When the weather is clear and calm, nocturnal temperature differences of 3-5 °C are normal, but differences of 8-10 °C are also experienced. The main cause is the extreme heating of surfaces and materials in urban areas. The production of heat by traffic and human activity and reduced cooling down through a scarcity of vegetation and open water, are other factors that contribute to the UHI effect. Furthermore, the urban geometry results in a higher “interception” of solar radiation, whilst on account of the smaller “sky view factor”, the thermal radiation is more limited than in the open country.

Many adaptation measures have already been proposed in order to limit the negative consequences of climate change on the urban climate, both for the spatial planning (more greenery and water, orientation and density of development) and for the characteristics of buildings. Moreover, microscale measures can have an impact on local or mesoscale measures. For example, the use of construction materials with increased reflection of solar radiation (higher albedo) will have a direct impact on the microclimate, but this can also have an effect on the local climate. And the reverse of this, measures in spatial planning to improve the natural ventilation of a district can have an effect at neighbourhood and street level.

The effectiveness of adaptation measures has, for the greater part, not yet been proven or quantified. That is why knowledge about meteorological processes is vital at the different scale levels (micro, local, meso) and the corresponding vertical scales of Urban Canopy Layer (level of living) to the atmospheric boundary layer above the city. The research project will, therefore, answer quite a few questions:

The Climate in the Urban Environment project forms part of the national research programmes into climate change, such as Climate for Space, the group of projects Climate in the City  and Knowledge for Climate.