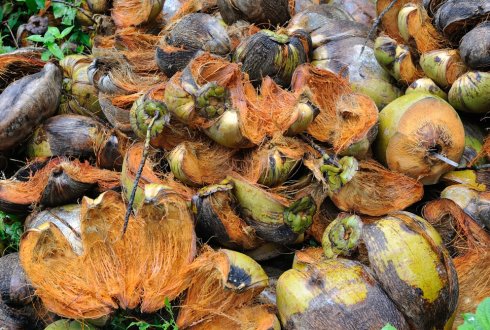 In tropical countries, coconuts are used for their pulp and milk.

Traditionally, products such as coconut mats and brushes are made from the husk, the hard, hairy shell. Because the husk contains a lot of lignin which acts as a natural adhesive, the department of Biobased Products at Wageningen UR discovered that sustainable production of board material from the husk was also possible.

Biobased Products at Wageningen UR has developed a method to manufacture high-grade board material from the husks of coconuts. The procedure for making boards is already old. However, the difference compared with existing production methods is that the husk is processed in a 100 per cent natural way into smooth boards or other forms. This process does not require the addition of glue or chemical binders. The technology to produce board material from coconut waste was developed in conjunction with institutes in the Philippines.

The husk of a coconut comprises 30 per cent coconut fibres and 70 per cent flesh. Those are separated from one another, after which traditional products, such as mats and brushes, are made from the fibres. The flesh contains a significant amount of lignin, a substance that is found in ligneous cell walls. In a melted form, that is suitable as an adhesive for the coconut fibres.
The husk of the coconut is separated for the production of boards. The husk is processed into small pieces and pressed under hot pressure into boards. As regards its properties, such as sturdiness and fire safety, the board material (called ecoco boards) that is obtained is comparable to or better than medium density fibreboard (MDF).

The use of coconut husks for the production of board material has a number of advantages:

The board material that is made from coconut husk can be used for all kinds of applications, for example, in the construction sector, such as wallboards, frames and similar. The material is intended for both local consumers and for export, for example, the furniture industry. The study is funded by the Common Fund for Commodities (CFC), a collaborative project between 100 countries that supports and assists agricultural projects.

Biobased Products is currently considering the options for large-scale production. A production factory is being set up to this end. The intention is to transfer knowledge and technology to coconut-producing countries, such as Sri Lanka, India, the Philippines and Indonesia.