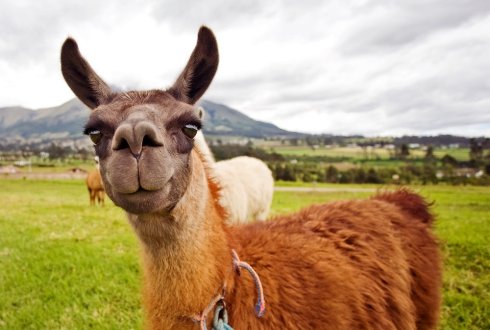 Please contact our expert for more information about our services:

Wageningen Bioveterinary Research is well-equipped for customized projects that are defined in close collaboration with the client. The process starts with the signing of a confidentiality agreement (CDA) to protect the client information. A work plan, to be included in a research service agreement (RSA), is defined in close collaboration between the client and an experienced Wageningen Bioveterinary Research scientist. The work plan contains information required for project performance such as selection of the immunogen, screening strategy, tasks/responsibilities, milestones, timelines, go/no-go moments, reporting and deliverables. The entire process takes about six months.

Wageningen Bioveterinary Research normally uses llamas (Lama glama) for immunization, but can also immunize alpacas (L. pacos). For conventional immunizations these animals are housed in a meadow. However, Wageningen Bioveterinary Research also has facilities for housing of animals up to BSL3 level. This enables the use of genetically modified organisms for llama immunization, including DNA immunization, and infection of llamas with pathogens that are not allowed to spread into the environment, such as foot-and-mouth disease virus. In a normal immunization protocol, llamas are housed for 10-11 weeks and immunized 3 times with a 3-4 week interval. A faster (7 weeks) immunization protocol is also possible. Large blood samples for construction of phage display libraries are collected one week after the first and second booster immunization. A part of these libraries is stored for future retrieval of antigen-binding clones whereas the remainder is directly used for selection of antigen-binding VHH clones.

A standard pIII-fusion phagemid vector (pRL144; Harmsen et al., 2005, Vaccine 23: 4926-34) is used for construction of phage display libraries of sufficient size to represent the diversity of VHHs present in the collected blood sample (>10 mln clones). Such libraries retain all functional antibody diversity present in the original blood sample. This differs from phage display libraries from conventional antibodies, where functional diversity is greatly diminished due to random recombination of heavy and light variable antibody domains. Therefore, phage display is a very powerful method for selecting VHHs. Antigen-binding VHHs are retrieved by two consecutive rounds of biopanning on immobilized antigen. Biopanning is done in a 96-well format enabling parallel processing of many selections under various conditions. Many variables are possible during biopanning, such as prior depletion of phage libraries on antigens that VHH should not bind to, selection for proteolytically stable VHHs or selection of VHHs that bind antigen with high affinity by biopanning on soluble biotinylated antigen, and competition with unlabelled antigen. After the second selection round, individual clones are screened for production of soluble VHH binding to the antigen in the assay of choice, which is usually ELISA.

VHHs are normally sequenced for the following purposes:

4. Engineering and production of VHHs

VHHs can be custom produced on asmall scale using baker’s yeast (Saccharomyces cerevisiae) in shaker flasks up to 3 L. With our preferred expression vector, VHHs are produced fused to the natural llama heavy-chain antibody long hinge containing a single cysteine. This expression format is suitable for passive adsorption of VHHs to polystyrene for use in ELISA (Harmsen et al., 2012, Journal of Immunoassay and Immunochemistry 33, 234-251). This vector also encodes an appended carboxy-terminal hexahistidine tag to facilitate purification of VHHs using Ni-NTA. Yields are typically 5-100 mg/L VHH dependent on the nature of the VHH. Other expression formats are also possible, such as C-terminal fusion to consecutive myc and hexahistidine tag or generation of genetic fusions of VHHs to make multimeric VHHs that bind in a multivalent manner or bispecifically to different antigens. At this step, specific mutations can be introduced in VHHs to improve specific properties. For example, two cysteine residues can be introduced to allow formation of an additional disulphide bond that is known to further increase the physicochemical and proteolytic stability of VHHs.