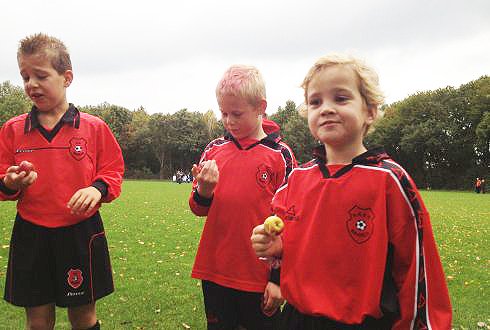 Finger-wagging next to the soft drinks machine or the fish-and-chip shop will not prevent people becoming overweight. A positive message, on the other hand, can! That is the idea behind Fruit4Sports.

Commissioned by the Innovation Network of the Ministry of Economic Affairs, Agriculture and Innovation, researchers from Applied Plant Research (PPO) are giving shape to this idea by making sports cafés a healthy place where fruit is on offer in addition to the standard sports café snacks. The first pilot scheme for Fruit4Sports has been set up in the eastern part of Amsterdam on the 40-hectare open sports facilities of Middenmeer and Voorland. Interest is growing all over the country.

Working towards a healthy lifestyle

Dutch people often go to sports cafés. They go to sports parks and sports facilities to participate in sports themselves, as a supporter or spectator, or to drop off and collect their children. This makes sports cafés the ideal place to work on behavioural change in an effective manner. The objective of Fruit4Sports is to help create healthier sports cafés, thereby contributing to the social objective of preventing 'diseases of civilisation' such as obesity (including youth obesity) and diabetes.

The concept is a simple one; it is about converting part of the greenery around sports fields for fruit production. Through the active cooperation of sports clubs, local companies, and other interested parties, Fruit4Sport aims to ensure that the fruit grown is sold in the sports cafés. Fruit4Sports also aims to work alongside local fruit suppliers in order to promote the availability of fruit in the sports cafés even when no fruit is available directly from the sports park's own orchard. This way, an alternative can be offered to the generally unhealthy range of food and drinks sold in sports cafés.

The idea for Fruit4Sports arose during brainstorming sessions of the InnovationNetwork (Ministry of Economic Affairs, Agriculture and Innovation). PPO further developed the concept and joined forces with the Maatschappelijke Verantwoord Verenigen Nederland (MVV Nederland, a platform for socially responsible organisations) with regard to securing the support of sports club boards.

The pilot scheme in Amsterdam was primarily intended to enable learning in practice. What obstacles will we encounter in shaping our cooperative relationship with sports clubs, municipal councils, and other local interested parties? Which fruit production system is the most suitable? Which changes occur with regard to fruit consumption, and does Fruit4Sports make a positive contribution to the eating patterns of the sportsmen/women and a healthier lifestyle? This knowledge can be put into immediate use within sports clubs also keen to take part in Fruit4Sports. Sports clubs, municipal councils, and provincial governments all over the Netherlands are responding that they want to adopt the concept. Work is therefore now underway on a plan to expand Fruit4Sports nationally.