The market for new ways to generate sustainable energy is booming.

In addition to wind and solar energy, the so-called biofuels are becoming increasingly common. Generating energy through burning, vaporising, or fermenting biomass such as leftover plant material, vegetable waste, and manure are well-tried methods. A new shoot on this branch of energy production is the microbial fuel cell, which is capable of directly generating energy from substances such as waste water. At the present time, this has only been done in the lab, but the first results and applications of this new technology are very promising.

If an electrode is placed in waste water, bacteria automatically begin to grow on it. These bacteria are capable of transforming the organic compounds present in the water into electricity. This process purifies the waste water, which in and of itself is a useful application. But researchers from Wageningen UR and Wetsus , a water technology institute, who are working with each other as part of the Microbial Fuel Cell project , are more interested in generating electricity.

They are testing organic materials which may act as catalysts on the process. They are also improving the design of the model to enable generating electricity on a larger scale.

How a microbial fuel cell works

One electrode (the anode) is suspended in the waste water and connected by means of conducting wire to the other electrode (the cathode), which is placed in an oxygen-rich environment. The anode and cathode are separated by a membrane, so that no oxygen can reach the anode and thus slow down the process.

The electrons generated in this manner travel via the conducting wire with resistor to the cathode, and along the way they can be used to power a light bulb, for instance. Once at the cathode, the electrons recombine with the protons and with oxygen to create pure water. 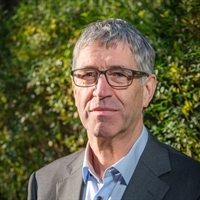