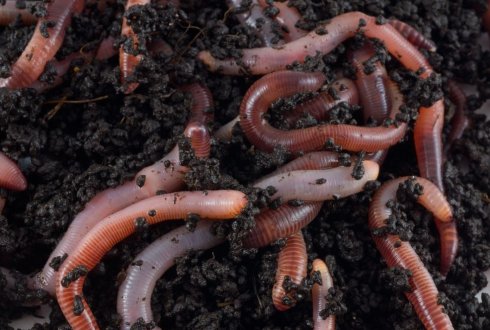 Earthworms increase greenhouse gas (GHG) emissions from soils, reveals new research published in the current issue of Nature Climate Change. The overall increase is severe: 33% for carbon dioxide (CO2) and 42% for nitrous oxide (N2O). “This is bad news for our battle against global warming,” said Ingrid Lubbers, PhD candidate in the Soil Biology group of Wageningen University, part of Wageningen UR, and lead author of the study. "Earthworms may help us to produce more food through improving soil fertility, but by doing so they also contribute to global warming by increasing GHG emissions from soils".

Lubbers, along with colleagues from Trinity College Dublin, the University of California at Davis and the International Center for Tropical Agriculture in Cali, Colombia, gathered all relevant published research to date: 57 different experiments. The common theme in the experiments was that they all measured how earthworms influence the net soil GHG emissions of CO2 and/or N2O, as well as their influence on soil organic carbon (SOC) stocks.

A statistical technique called meta-analysis allowed the research team to discern overall patters in the huge body of experimental data. “The claims on the effects of earthworms on soil GHG emissions in the literature varied widely," explained Dr Jan Willem van Groenigen of Wageningen University and co-author of the study. “For N2O, the story appeared to be relatively clear: our own experimental studies, as well as those of other research groups, strongly suggested that earthworms increase emissions of this GHG. For carbon, the publication record showed conflicting views. Some studies reported increases in CO2 emissions, whereas others suggested that earthworms might stimulate carbon sequestration in SOC, thereby neutralizing or even overcompensating the effects on N2O".

However, after analysing the data a clear pattern was observed: "Earthworms increase emissions of CO2 (33%) as well as N2O (42%), and there are no indications that they affect SOC stocks in soils”, says Kees Jan van Groenigen, research fellow at Trinity College Dublin and co-author of the study.

Earthworms probably increase GHG emissions through a combination of mechanisms, as they change the soil environment in many different ways. They mix organic plant residues in the soil, which may increase decomposition and CO2 emissions. Moreover, the earthworm gut also acts as a microbial incubator, boosting the activity of N2O-producing microbes. Finally, by burrowing through the soil, earthworms make it easier for GHGs in the soil to flow to the atmosphere.

"This is important information for our fight against global warming", Jan Willem van Groenigen continued. "Soils are a major player in regulating global warming. There is more C in SOC than in atmospheric CO2, and agricultural soils are by far the largest source of N2O emissions, because these soils receive large amounts of N fertilization. Small changes in soil GHG dynamics can therefore have important repercussions for global warming. It is rather unfortunate that earthworm presence, which we try to stimulate in sustainable agriculture due to their positive effect on soil fertility, at the same time has an unwanted effect on GHG emissions".

However, the earthworm/GHG knot is far from being disentangled. Many questions remain: it is not yet clear to what extent stimulating effects of earthworms on plant growth can negate earthworm-induced increases in GHG emissions. “Our literature search also pointed out a large gap in the published studies. We need more experiments that include growing plants, as well as more long-term studies and more field studies before we can decide to what extent global worming leads to global warming,” Lubbers concluded.