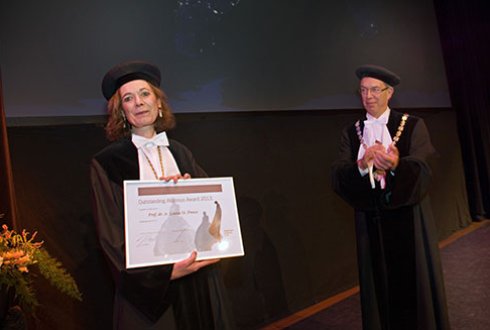 The Outstanding Alumnus Award consists of a bronze figurine entitled ‘Vrijheid’ [Freedom], made by the sculptor Marian Spekreijse.

Louise Fresco began her career as a Wageningen student in 1970, and was awarded a PhD with honours in 1986 for her thesis on tropical agriculture. Four years later, she was appointed as Professor of Plant Production Systems in Wageningen, specialising in tropical regions. In 1997, she accepted a post in the UN’s Food and Agricultural Organisation (FAO), where she was appointed Assistant Director-General at the turn of the century. Since 2006, she has been university professor at the University of Amsterdam, specialising in the principles of sustainable development in an international perspective. She is also Distinguished Professor at Wageningen University and holds various part-time chairs at home and abroad. Other positions include a membership of the Board of Commissioners of the Rabobank and a membership of the Royal Netherlands Academy of Arts and Sciences (KNAW).

Prof. Fresco occupies a prominent position in the Volkskrant newspaper’s top 200 of most influential Dutch people and the Trouw newspaper’s sustainability top 100. In addition to her scientific articles, she has published a number of non-academic books, writes a column in NRC Handelsblad, one of the leading Dutch newspapers, and recently published a book entitled ‘Hamburgers in het Paradijs’ [Hamburgers in Paradise].

In its official report, the jury (chaired by Rector Magnificus Prof. Martin Kropff) referred to Louise Fresco as a role model for countless young researchers and professors. She is a true, multi-talented intellectual, using her strong scientific acumen and knowledge and her background in Wageningen, she challenges dogmas and taboos which are based on emotions and prejudices. She combines her knowledge of natural sciences with social economic insight, and has mastered the art of linking cultural backgrounds to the problem of food security. For these reasons, the jury was unanimous in its decision to award the Outstanding Alumnus Award 2013 to Prof. Louise Fresco out of 16 eminent nominees.

Wageningen University Fund presents the Outstanding Alumnus Award to graduates who have made an outstanding social contribution to the Wageningen domain.