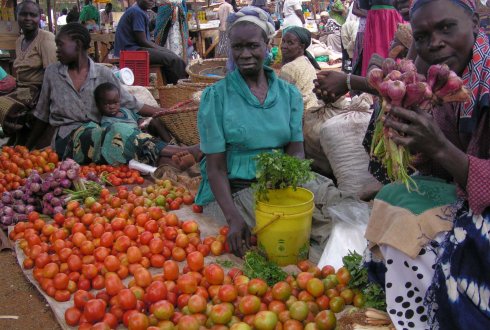 Increasing food security in developing countries by making farmers less vulnerable to the effects of climate change. That is the objective of Community Climate Change Resource, a project of the Centre for Genetic Resources the Netherlands (CGN), the Centre for Crop System Analysis and the Chair Group Technology and Agrarian Development(TAD). In this project, Wageningen researchers are working together with local partners in Ethiopia, Zimbabwe and Indonesia.

The climate is changing, especially in many developing countries. Weather is becoming more volatile; rainfall has increased in some areas, while other areas are receiving far less than normal. This creates problems for local agriculture. To ensure that farmers become more resilient to climatic influences, the Centre for Genetic Sources the Netherlands (CGN), the Centre for Crop Systems Analysis (CSA) and the Chair Group Technology and Agrarian Development (TAD) are implementing the Community Climate Change Response (CCCR) project. Through this project, farmers in Ethiopia, Zimbabwe and Indonesia have the opportunity to test different plant starting material (seeds) and learn new approaches to food production.

Farmer Field Schools are a central feature of the CCCR project. In each ‘school’ about 30 farmers from various villages receive guidance for one season in searching for the right crops and varieties to cultivate. Local partners of Wageningen UR provide starting material originating from the tropics so that the chance of success is high. The farmers learn how to select the most appropriate variety and how to cross different varieties. In the Farmer Field Schools farmers learn primarily from each other. Guidance is provided by local partners of the Wageningen organisations CGN, CSA and TAD in addition to extension services, national crop breeding institutes or industry representatives.

The CCCR project is active in three regions in Ethiopia, four in Zimbabwe and four in Indonesia.  Project regions were deliberately chosen to cover a variety of conditions:

This diversity makes it possible to study the effects of CCCR under various conditions.

CGN, CSA and TAD will contribute to this project primarily through development of the concept, provision of technical and socioeconomic background information, guidance of the partner organisations and scientific evaluation at the end of the project.

There is plenty of interest among farmers in all of the participating countries. Bert Visser, director of CGN and project leader of CCCR explains: ‘Participation is optional, so the farmers who participate really recognise the added value of this project. They benefit directly from the results. Farmers at a school in Ethiopia have recently started using their own variety of maize. These plants grow better and are also open pollinators, so they can propagate themselves. The farmers don’t have to buy any hybrid varieties and have thus become more independent.' The final evaluation of CCCR is expected in 2013.