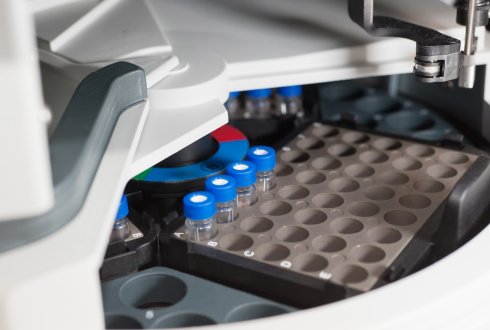 Extracting molecules from a liquid sample, separating them form each other, determining the properties (size and mass) and characterising the interactions between molecules used to take Food Chemistry researcher Surender Dhayal “at least a week”. But thanks to new equipment, the Asymmetric Flow Field Flow Fractionation (AF4) bought by CAT AgroFood, it now takes just four to five hours to get all those data.

Dhayal’s research focuses on enzymatically creating large protein particles. Until recently, he separated those proteins from other molecules by using Size-Exclusion Chromatography, a technique where a liquid solution is pumped through a column of beads to separate different size molecules. But there are various problems with that technique, Dhayal and his supervisor Peter Wierenga explain. “The biggest particles cannot be analysed/separated with the SEC”, says Wierenga. “And there are also particles that get stuck in the column because of interaction with the beads”, Dhayal adds. Wierenga clarifies: “This interaction could be due to electrostatic interaction for instance. We only want the molecules to be separated because of their size, not for ‘a-specific’ reasons, such as electrostatic charge.”

From 2 nanometres to 10 micrometres

The AF4 can separate a wide range of liquid-dissolved particles. “From 2 nanometres to 10 micrometres”, Wierenga specifies. “And,” Dhayal says, “because there’s no interaction with beads, we are not unsure about anything. We now know 99% of the consistency of a sample, instead of 90%.” This is particularly important when analysing how molecules behave during a process. Dhayal: “We can now make more sense of the process. If you keep adding heat, the aggregated proteins can, at some stage, become too big to for the SEC. With the AF4, which has a much wider range, we don’t have that problem.” The two researchers explain something about two peaks on a chart, of which the first one is ‘a-specific’ and therefore it’s unknown what happens there. The graphs from the AF4 don’t show that first peak, which takes away any uncertainty of what’s happening in the beginning of the heating process.

The possibilities of this fairly new technology are still largely untapped. But there are many opportunities for a wide variety of applications. Dhayal: “Anything that is soluble – small, big and even bigger – can be extracted from liquids in this machine. Whether it are proteins and polysaccharides from food samples, particles from soil samples, or non-organic materials like polystyrene or latex.”

The AF4 was only placed at Wageningen University’s Food Chemistry chair group in April 2012, so the Wageningen scientists haven’t yet gotten any results that couldn’t be achieved with a combination of other techniques. The only result, so far, is the incredible time saving. But Wierenga is convinced the AF4 can do much more. “We will soon be starting research that can produce evidence of clear advantages over the SEC”, says Wierenga. He is thinking of experiments that show, for instance, the breakdown of polysaccharides during digestion and the changing properties of proteins that are being heated.

All technical information about Asymmetric Flow Field Flow Fractionation (and other facilities) can be found on the CAT-AgroFood website. If you have any questions or would like to use the facility, please contact peter.wierenga@wur.nl or info.cat-agrofood@wur.nl. Staff of Wageningen UR can give assistance in using the machine or they can run the samples for you.