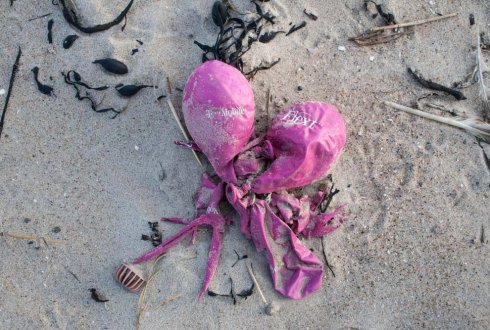 Surprisingly little scientific research has been done to investigate the degradability and potential harm from latex balloons in natural environments.

Photo: A bundle of advertising balloons, of which some seem to have exploded high in the atmosphere, while others have descended almost unchanged.

Report of the industry

A regularly cited, ‘scientific’ report is:

This is a study by the balloon industry. It is argued that latex balloons almost all explode into smal fragment in the freezing low pressure conditions of the high atmosphere. It also states that the degradation of the small rubber bits, once back on earth, would be as fast as that of oak leafs, suggesting that this can present no danger. The oak leaf comparison is taken on board because experiments showed that balloon rubber had only lost a few percent of its original mass after 6 weeks. Oak leafs take a long time to decompose!

Report on eating latex by animals

A recent report, regularly cited as evidence for the ‘harmless’ character of latex balloon debris after ingestion by animals, is:

The first chapter from this study contradicts the conclusions of Burchette. Only 12% of balloons released exploded into small fragments: 81% returned as large pieces of latex of at least half the original balloon mass. The question of size of rubber particles returning to the ground is really not so relevant: different sized pieces may have different effects or may impact other species of wildlife. Irwin’s experiments showed that latex exposed to air became brittle after 8 to 10 weeks. In water, latex kept its original flexible character for over 5 months, with associated duration of wildlife encounters.

The second chapter of Irwin’s report is being considered as evidence that the ingestion of pieces of latex balloon rubber has no harmful consequences to animals. A council member of the city of Utrecht was even triggered to consume a small piece of latex balloon. It is evident that such demonstration has no scientific significance.

In no way, the Irwin report provides evidence for lack of harm from latex ingestion. Only four weeks of experiments were conducted with quails, fish and freshwater turtles. No control experiments (animals not fed plastics) were conducted which can be seen as a severe scientific omission. Results are unclear about the quantities of rubber actually consumed by different individuals. Potential negative effects were measured from stress-hormones in blood without clarity how latex ingestion would lead to measurable stress. Effects were also investigated by looking at body mass changes, showing increases in quail and fish, and no clear lasting effect in turtles. However, all experimental animals were still in a life stage of growth and were offered unlimited good quality food: thus body mass changes are not really a good indicator for impacts. Importantly, after the experiments, 20% of the turtles showed accumulations of rubber particles in their digestive tract, plus average body mass in the last 2 weeks decreased. This suggest initial stages of blockage of the digestive system leading to insufficient uptake of food. But the experiments did not run long enough for a good evaluation. The author is aware of such issues, and only ventures a rather non-specific conclusion of his study:  “Results of this study suggest that consumption of latex balloon fragments may not pose a threat to many wildlife species”.

In short this means that an interpretation of this report as giving no evidence for negative effects is not correct. Maybe this explains that this University report has not yet been published in peer reviewed scientific literature, in spite of the fact that the report states that such publication is intended. Anyway, the study was inadequate to show absence of negative effects from latex ingestion. It is absolutely incorrect to interpret the lack of such findings as an evidence for ‘no effect.

Research of Wageningen Marine Research of plastics in stomach contents of Northern Fulmars does not make specific records of presence or absence of latex balloon rubber. Often latex remains are insufficiently recognisable as originating from balloons. In clear situations only, under notes, there may be mentioning that the rubber seen is considered to have a balloon origin (see photographs and short video). Balloon latex is described in about 2 percent of the stomachs that have been investigated. We do not know the precise consequences, not do we know if and how other wildlife species may be impacted. All that remains then to take decisions, is the non-scientific balance between the fun of a balloon release and the knowledge about a few percent of dead animals with balloon remains in their stomachs.

This information forms part of: