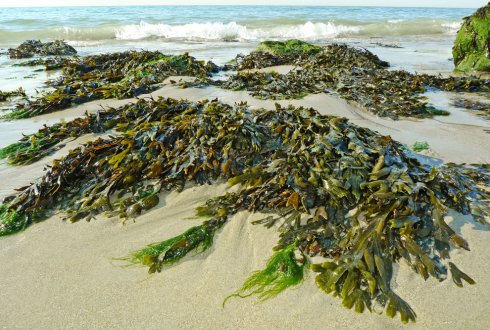 Cultivation of silt vegetables, seaweed and fish can be combined into one sustainable farming system on silt soil. This is what the scientists of Wageningen Plant Research are working on. This would make coastal areas suitable for food production which are now - due to their high salt concentration - often unsuitable for good production.

Terrestrial food production will in due course reach its limits because at certain point in time no more land can be made suitable for crop production. This made our scientists come up with the idea that there is plenty of sea, as well as silty land in coastal areas. Question is how to set up a sustainable production system with economic perspective, which is ecologically sound, and is accepted by society.

Combination of the cultivation of silty vegetables, seaweed and algae, and fish farming seems the best option. Starting point is that the cycles are closed as much as possible. An experimental farm has been set up in Colijnsplaat in Zeeland in the context of the large multidisciplinary project ‘de Zeeuwse Tong’. Experience on this farm should learn whether the system is attainable and profitable.

Sole is grown in a number of ponds near the Oosterschelde; the sole is preying on the ragworms that have also been put into the ponds. And they are given supplementary feed. Loss of nutrients is prevented by first letting the water from the ponds flow through a pond with algae that are absorbing most nutrients. The remaining water is then flowing on to a pond with halophytes, plants that are tolerant to salt water, for further purification.

This system can ultimately be combined with a system for the cultivation of silt vegetables, which are currently still grown elsewhere. Silt vegetables are already commercially cultivated on a small scale but they are usually harvested by cutting wild plants. Our scientists are now testing how germination can be improved, which would be optimum fertilisation levels, and how a uniform crop can be obtained that is suitable for mechanical harvesting.

Development of the total production system requires good tuning of the various links. The scientists must also work out the financial costs and yields of such a system.