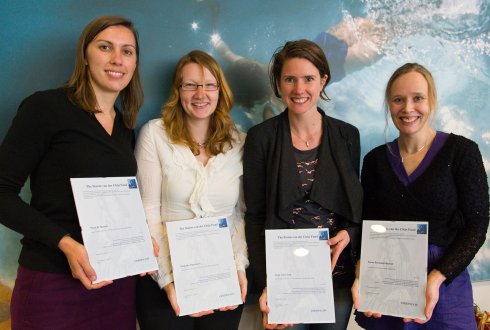 On Thursday 18 April 2013, three stipends and one honourable distinction were awarded to four talented female PhD candidates of Wageningen University, part of Wageningen UR, on the occasion of the biannual awarding of the Storm-van der Chijs Stipends. Nora Sutton, Natalie Theeuwes and Anne van Loon received a stipend and certificate; Susan Boonman-Berson got an honourable distinction.

This year the Storm-van der Chijs lecture and awarding were part of the Farewell symposium for Prof. Dr. Anke Niehof to honour her for her support to the advancement of the position of women scientists and gender studies at Wageningen University.

The stipends underline the quality of the work of the awardees and are meant as encouragement to pursue their academic careers. The stipends – one is usually sponsored by the Wageningen UR Executive Board – give each 1,500 euro to be used for further international profiling by a visit to an academic conference or institute abroad.

The stipend criteria of richness in initiative, interdisciplinarity, international embeddiness and linking science and society were considered best reflected in the work of Nora Sutton, Environmental Technology. She got the first stipend for her research on remediation of polluted soils in which she combines approaches from several disciplines and discusses possible applications within international contexts and with many stakeholder groups. The second stipend was given to Anne van Loon, Hydrology and Quantatative Water Management Group, especially for her work in developing methods that better understand and manage drought and water scarcity. The third stipend was given to Natalie Theeuwes, Meteorology and Air Quality, for her research work from a multi stakeholder and interdisciplinary approach in developing interventions in urban areas to diminish effects on heat and related health issues by climate change. Furthermore this year a honourable distinction was awarded to Susan Boonman-Berson, Forest and Nature Conservation Policy, with this time a small stipend since she just followed the others according to the jury report. Her work is developing interdisciplinary approaches to bridge different perceptions on wildlife management especially in human-wildlife conflict situations. The four women together represent the wide ranging domains of Wageningen UR.

In her introduction to the awarding of the stipends Dr. Margreet van der Burg, chair of the Storm-van der Chijs Fund, again discussed the state-of-affairs concerning the low proportion of women in scientific (management) positions. She first thanked all supervisors who nominated their female PhD candidates for their exemplifying encouragement by giving them this professional support. She referred to the most recent figures (of August 2012) of Wageningen UR to point out that the progress was very modest and therefore argued for more solid monitoring. She pointed at its need by stressing the recent decrease in the amount of women in the specific higher academic positions, particularly the chairholders. Fortunately, she could also mention some promising stats: 56% of the PhD candidates at Wageningen UR is female and many so-called Baby boomers, mainly male, will soon retire. Nevertheless, more effort in raising awareness in promotion and selection policies and procedures is needed to effectuate solid results. Van der Burg therefore repeated her call for a concerted effort that is supported by all management levels, which provides for a guiding task force that assesses initiatives from elsewhere that could be applied at Wageningen UR, that secures implementation and assessment of Wageningen UR policies and practices, and brings contradicting policies and practices into debate.